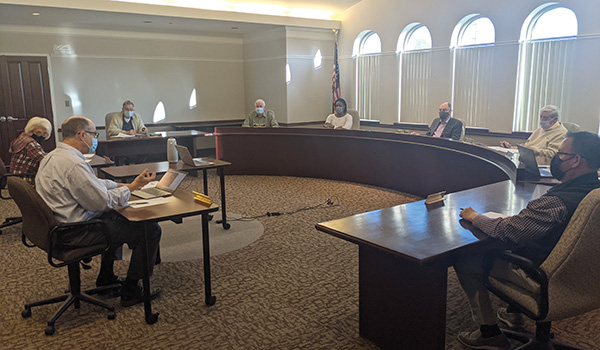 DOWAGIAC — Local basketball players will soon have fresh courts to play on.

The Dowagiac City Council passed a resolution to authorize the repair and resurfacing of the basketball courts at Walter Ward Park on Thickstun Street during its meeting Monday at City Hall.

“Walter Ward Park is one of the most used parks in the city and the basketball courts are the center of activity in the park,” said City Manager Kevin Anderson. “Over the past several years, the court surface has been deteriorating.”

The courts have been in place for more than 20 years. Plans were made to resurface these basketball courts last year, but were pushed back one year due to uncertain financial conditions due to the pandemic. According to Anderson, repairs and resurfacing can be done at this time and will likely be good for six to ten years. The next time resurfacing is required, it is likely that a full replacement will be required.

Quotes for the resurfacing of the park’s three basketball courts have been received from two local contractors.

“We have two very good contractors here,” he said. “We’ve seen their work and both of them can do the job. I’m trying to get a finalized date on which each contractor could start and then we can go with the one that can start the earliest.”

Once a contractor has been hired, Anderson hopes park repairs can begin this spring.

City council also authorized the purchase of Right-of-Way from the Michigan Department of Transportation for the purpose of placing a community entrance sign commemorating the 100-year anniversary of the Dowagiac Rotary Club.

The resolution is the last piece of a project two years in the making.

In November 2019, city council passed a resolution authorizing an application to purchase Right-of-Way from the state of Michigan located at the intersection of M-51 and M-62 near the Rite Aid store.

The Dowagiac Rotary Club had been working to place a “Welcome to Dowagiac” sign commemorating its 100th year as a club in Dowagiac. They were successful in their fundraising, but needed Michigan Department of Transportation approvals for sign location.

“After discussions with MDOT officials, it became apparent that the best approach forward would be the purchase of ROW from MDOT, even though we all knew that the purchasing procedure would have a long lead time,” Anderson said.

Because MDOT will only work with governmental entities on matters like this, the city council authorized the city to be the applicant. All costs for permitting and locating the sign have been paid for by the Rotary Club.

The state has completed their work and will sell the ROW for $1,800. The city has received a check from the Rotary Club for this amount. With the resolution passed, documents will be signed and sent to the state.

Rotary has been in contact with contractors and is hopeful to begin construction soon.

The council’s recent audit report said that a DEP for the DDA would need to be submitted to the State Department of Treasury due to a deficit fund balance shown on the Sept. 30, 2020, audit.

According to Anderson’s memo to the city council, the deficit is due to the purchase of the former Zeke’s building and sales are pending that will be used to offset the deficit. The resolution Council is considering indicates that the General Fund will cover any deficits not covered by the building sales during the current fiscal year.

DOWAGIAC — For more than 150 years, the state of Michigan has been known for its manufacturing prowess. The city... read more