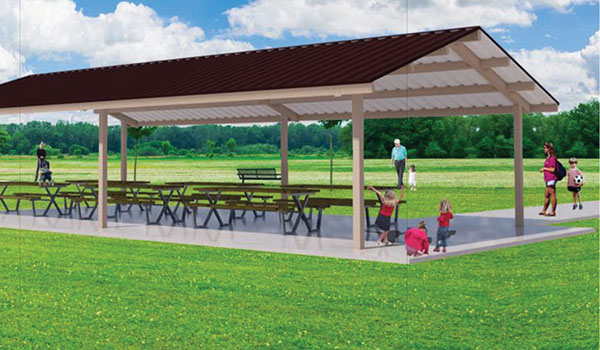 DOWAGIAC — A local organization has reached the last leg of a long-term project.

The Young Professionals of Greater Dowagiac has reached its fundraising goal of $40,000 for its Russom Park Pavilion Project.

The project, which has been in the works for more than three years, involves the construction of a steel pavilion to complement Russom Park’s sports complex, which features baseball, soccer and softball fields for park visitors.

“We knew there was a need for a pavilion,” said Young Professionals member and Wightman Project Manager Stefany Holland. “Russom is such a great amenity for the community. From volunteering, rocket football, exercising and more, it’s a place where we spend a lot of time. It’s a great space, and we want to keep trying to amplify it as much as we can.”

Holland said the organization has purchased the materials necessary for construction and is in the process of planning when construction will take place.

Holland expects the construction portion of the project will begin in late April or early May with the laying of concrete, and the pavilion equipment will be delivered in June or July for installation.

“We want to do both a groundbreaking ceremony and a ribbon cutting ceremony,” she said. “We have our golden shovels. We’d like to have city and township leadership there as well as our stakeholders.”

The Young Professionals group, which has been around for approximately seven years, wanted to have something that would leave a lasting impact in the community. Multiple capital projects were discussed, with the organization ultimately deciding the community lacked a pavilion at Russom Park.

After the group decided on the pavilion, different members had skills to contribute to the project. One member, who is an engineer, was able to help the group with designing blueprints. Another member, who is a photographer, designed flyers and pamphlets to show renderings of what the pavilion could look like after
its completion.

The group settled on a $40,000 fundraising goal, which Holland is grateful for.

“When we set that mark, we tried to be very conservative,” she said. “Construction prices went up, largely due to the pandemic. We’re thankful that we decided on that number. Since the pavilion is a steel structure, we were hoping we’d be safe since it’s cheaper than other materials, and we were able to purchase everything we needed.”

Other members of the group contributed to the project by offering creative fundraising ideas, including the Paddling Poker Run and its annual “Uniquely Dowagiac” Christmas ornament sale.

With the pavilion project nearing completion, Holland said the group has begun preliminary discussions regarding its
next project.

“We’re already talking about the next thing,” she said. “Now that we’ve gone through this process, we have some good ideas. We’ve thought about a natural playground or a park area somewhere else in town. We’ve got some time to think about it.”

DOWAGIAC — It is not uncommon to see Walter Swann attend Dowagiac Rotary Club meetings every Thursday. He has been... read more