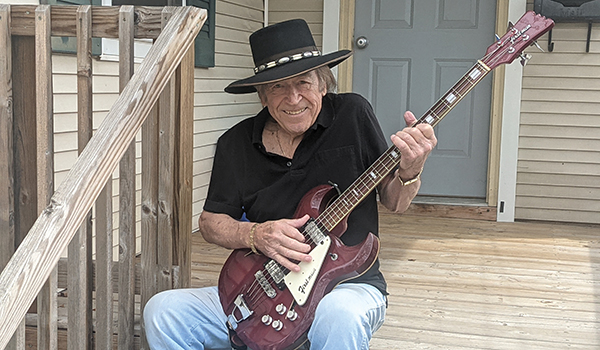 DOWAGIAC — Wayne Dahring remembers the moment like it was yesterday.

It was the early 1970s and Dahring, a music producer and promoter, was waiting for a young rock band from Canada to stop by his Southfield, Michigan music recording studio to hear them play.

“They came across the Detroit River on a boat,” Dahring said. “I walked into the studio and jokingly asked one of my guys ‘where’s this rush group’ because the word ‘rush’ was stamped on the pallet their amplifiers were on for rush delivery.”

That band would later become the multi-platinum rock band Rush.

“They were called something else at the time,” Dahring said. “That was the first group that really inspired me to get into the promoting and advertising side of the industry.”

From his days as a member of the Dahring Trio performing at the House of David to forging friendships with music icons including Bob Segar, Kris Kristopherson, Dahring’s love for music is what drives him to this day as a Dowagiac resident.

“Music kind of gets in your blood,” Dahring said. “Once you’re involved in the music and entertainment business, it never goes away. You’re always looking for a new avenue to excite people.”

Born in St. Joseph, Michigan, Dahring’s music career began at the age of 8 when he began music school at Rubin Music Studio in Benton Harbor. It was there that he learned to play guitar and took voice and dance classes with his two sisters Beverly and Shirley.

The siblings formed The Dahring Trio when Dahring was 10 and won a contest hosted at the Benton Harbor’s House of David. The group would eventually perform at the Liberty Theater in Benton Harbor.

“That was a very famous theater,” Dahring said. “We performed before a big movie was set to air. “We were excited because we were in the limelight.”

Dahring continued to perform and write songs into adulthood and founded KD Productions in the ‘70s. He promoted and staged for several notable acts including REO Speedwagon, Andy Gibbs, The Bay City Rollers, Rush, Big Al Lang and others.

Dahring wore many hats in addition to his cowboy hats. When Dahring was not promoting musicians, he was working in the aerospace industry selling airplane parts for H.C. Pacific in Southern California. That’s where he met Mickey Lee, a California native who also sold airplane parts while performing blues music on the side.

“He was an outside representative for that company and he covered the East coast and Midwest customers calling in,” Lee said. “I was the sales manager inside the company. Wayne’s job was to go face to face with our customers and he just did a great job and it so happened that he reported to me what he found or what he’s digging up in terms of sales of aerospace hardware. So that’s how we began collaborating.”

In the early 2000s, Dahring collaborated with Lee on two albums, “Flashback” and “Another Time Another Place.”

“We got together for some ideas,” Lee said. “Wayne was quite proficient at writing lyrics. I learned a lot from him in that regard.”
With Dahring as the lyricist, Lee would then arrange the songs around the lyrics and record the songs.

“Those albums were bluesy, classic rock type of mixture,” Lee said. “I did all the recording myself. It was a lot of work but in my mind, I accomplished it with Wayne. I wanted to make a recording and I was able to make two.”

Dahring moved to Dowagiac in 2018 after 22 years of living in Texas. While he may not be actively involved in the music industry at the moment, he has not ruled a return under the right circumstances. For now, he’s enjoying his time with the community.

“I love this town,” Dahring said. “I can walk across the street and go right down to the post office. I feel safe here and everyone is so friendly. I haven’t made a phone call to anyone here that I didn’t enjoy talking to. They’re down-to-earth people and you can call them by their first name.”

DOWAGIAC — The era is 1860s Dowagiac. Families across the village begin making their way to First Universalist Church of... read more