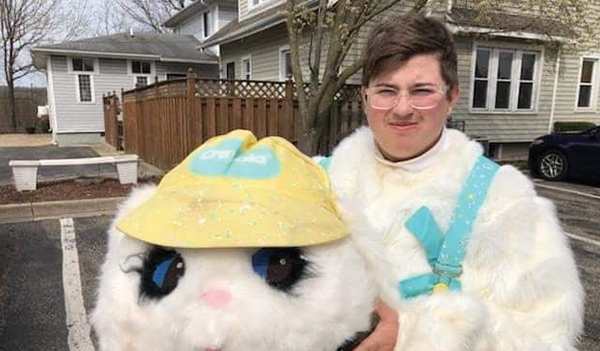 NILES – The Riverfront Optimist Club of Niles is “hopping” to spread some cheer this Easter Sunday.

Last year, Josh Sitarz, president of the club, had planned to distribute Easter baskets to children in need. With COVID-19 mandates fresh at the time, the event was unable to happen the way club members had hoped.

“We wanted to do something nice for the community,” Sitarz said. “A lot of families were suffering last year.”

Instead, the club ended up distributing the baskets later, in a different fashion.

“Tom Majerek and I were able to go door to door with the baskets,” Sitarz said. “This year, we’ll be actually able to hand them out.”

“There is a whole bunch of candy,” Sitarz said. “I’m still getting dollar coins [for the eggs]”

Sitarz remembered a church Easter egg hunt from when he was growing up where some of the eggs contained coins.

As Sitarz and Majerek distributed the Easter baskets last year, the Easter bunny made an appearance on their circuit. Sitarz said he was uncertain if the Easter bunny would be able to make it to the event at The Rage, but he did not rule out the possibility.

Sitarz is excited about future events the Riverfront Optimist Club of Niles members are working to organize.

“We have been putting 110 percent into the Bluegrass Festival,” Sitarz said. “We are still working with the health department and the city to make that happen with regulations. I feel ‘optimistic’ this year that it is going to happen.”
He said the event may have to be scaled down in size, due to safety precautions, but he feels confident the club will be able to host something like the Bluegrass Festival.

Residents with questions about the Easter basket event on Sunday can reach Sitarz by messaging the Riverfront Optimist Club of Niles’ Facebook page.