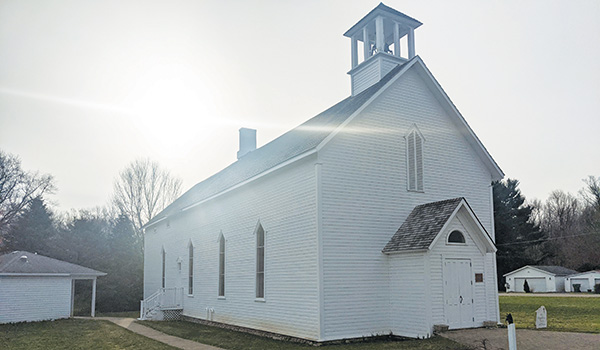 POKAGON TOWNSHIP — A local church nestled in Pokagon Township played host to the debut one of the world’s most popular Christian hymns.

The Old Rugged Cross Church, formally known as The First Methodist Episcopal Church of Pokagon, is a historic church located at 61041 Vermont St. in Pokagon Township.

The church is known for featuring the first performance of the hymn “The Old Rugged Cross,” a popular hymn written in 1912 by evangelist and song-leader George Bennard.

According to the Michigan State Housing Development Authority, the building was erected in 1862 as a hop barn before being purchased by the First Methodist Episcopal Church of Pokagon in 1876. The church purchased the building and enlarged and remodeled it into a church.

In 1913, Bennard was asked by his friend and the church’s pastor, Leroy Bostwick, to help with the church’s revival meetings at the church. It was there that the church’s five-member choir performed Bennard’s “The Old Rugged Cross” for the first time the hymn was performed in public.

“If you grew up in the church, you grew up with ‘Old Rugged Cross,’” said Sharon McKnight, church pianist and member of the ORCF advisory board. “I can remember singing it when I was a little kid. It’s one of the songs usually played at funerals and around Easter. It’s familiar to most people and has a lot of meaning to it.”

Just one year later, the building was sold after the church bought the local baptist church and relocated, and the once proud church would spend decades being used as a barn.

The dilapidated structure was in danger of collapse before Bob and Molly Shaffer purchased the historic building in 1998 and created the Old Rugged Cross Foundation, a 501(c) with the goal of restoring it to its original state.

“When we first started, it was just gray walls on the outside,” McKnight said. “There were all kinds of weeds in here and everything. It’s almost unrecognizable.”

After numerous fundraising projects and hours of volunteer work, the church was restored to what can be seen today. A history museum with an assortment of artifacts related to the church and surrounding area was installed in the old church’s kitchen, which is where the museum is now. The church received Michigan State Historic Site designation in 2000 and was included in the National Register of Historic Places in 2002.

According to the ORCF, the first pew on each side of the sanctuary, the pulpit, pump organ, and altar table are all original pieces from the old sanctuary. The cook stove in the museum was also an original piece used. The bell in the bell tower is also original.

Today, the organization conducts tours of the historic site and makes presentations to churches, civic organizations and other groups. Socially distanced hymn sings are hosted on the first Sunday of every month and will resume on May 2. The sanctuary is also available to rent for weddings and special services.

The organization had its first in-house hymn sing on May 3, 2009, with McKnight as the pianist. According to McKnight, it is the music that sets the site apart from other churches.

“They get to sing what they want to sing,” she said. “People in the congregation leaf through the pages, and they call out the number of the hymn they want to sing.  We just sing one song right after another and usually go for an hour, hour and a half. In a regular church service, the pastor or the song leader is the one who picks the songs. Some of the old favorites aren’t sung very often but here they can be.”