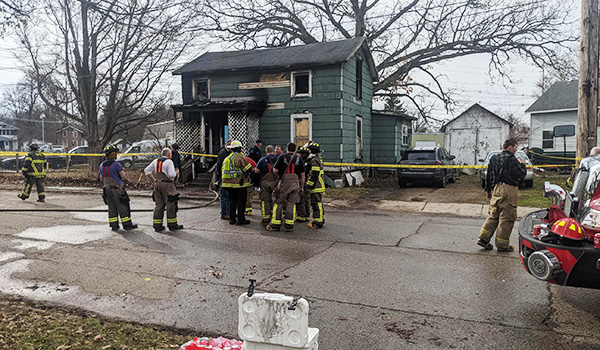 DOWAGIAC — Police have identified the victims of a Thursday Dowagiac house fire.

Gregory Alan Heron, 36, and Dolly Sue Waterson, 36, were killed Thursday in a fire on Telegraph Street in Dowagiac.

The fire took place Thursday morning at 310 E. Telegraph in the city of Dowagiac.

The fire department was en route and noted visible fire conditions four blocks away and arrived on scene within three minutes. They reported a working fire with flames visible in the front and left sides of the two-story building as viewed from the street along with possible occupants still in the residence.

Fire crews worked aggressively to enter the structure for search and rescue operations but were slowed by fire involvement and building contents. Firefighting efforts continued and Indian Lake and Sister Lakes Departments were called to assist. Firefighters searched as fire conditions improved and located two victims in an upstairs room. The victims had succumbed to fire conditions.

The State Police Fire Investigation Unit was called as well as the Medical Examiner’s Group from Western Michigan University’s Pathology Department to assist with the investigation. Both victims were taken to the Kalamazoo Pathology Unit for post mortem examinations. Cassopolis Fire was also called and was on standby in the area for additional coverage.

The investigation reveals the fire started on the first floor and spread rapidly in the house and up the stairs blocking the only access. There were no smoke detectors in the residence.

The fire is believed to be accidental.