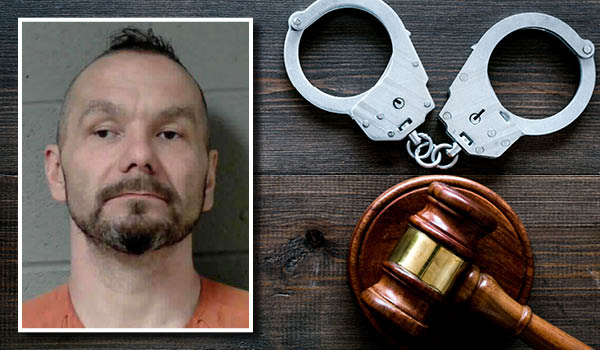 Niles man sentenced up to 15 years for standoff with police

CASSOPOLIS – A Niles man was sentenced to prison Friday in Cass Circuit Court stemming from a January 2020 police standoff in Milton Township.

He was also sentenced to five terms of two years in prison for use of a firearm in the commission of a felony. The felony firearms sentence is consecutive to the other prison sentences mentioned above. He must pay $17,081.26 restitution to the Berrien County Sheriff’s Department for their law enforcement costs.

He has credit for 435 days already served and had his weapon forfeited. The prison terms can be served in any correctional facility including in Indiana where he still faces charges.

The incident occurred Jan. 8, 2020, at a home in the 33000 block of Redfield Road. Police surrounded the home for 14 hours before a child in the home was released and Nieman surrendered when tear gas was deployed. LaPorte police and U.S. Marshals had gone to the home to arrest Nieman on robbery and other charges.

Two pictures of the situation emerged in comments before the sentencing.

“He said he was consistently targeted and his life endangered but he endangered the life of a child, his girlfriend and the police,” Fitz added. “He said he overreacted to the aggressive actions of the LaPorte police. If he had obeyed police, he wouldn’t be going to prison.”

“The person who made this situation what it was, was you,” he told Nieman. “You created the felonious activity where there didn’t need to be.”

Nieman said he never kept the minor child or his girlfriend from leaving the home and said the situation had been blown out of proportion.

“It all stemmed from a 2017 case in LaPorte. I was tried once, but there was no guilty verdict,” he said. “I made the decision to run. … I do face the fact that my predicament interfered with others’ lives.”

“The only one in danger was me, the target was on my back,” he added. “I was the only one threatened. The situation de-escalated when my family came and were there for me … I’m not proud of anything that happened, I acted aggressively toward aggressive action. Everyone should have handled the situation differently.”

“I’m glad it ended the way it did with no one hurt,” he said. “I want to thank everyone for supporting me. I’m not going to claim to be the best American citizen in the world, I’ve made a lot of mistakes but I’ve tried to take responsibility. I’m not trying to make the circumstances anything they weren’t.

Cass County Circuit Judge Mark Herman said everyone was glad at how the situation was resolved.

“You indicated you were happy with the way things turned out; I think we all are,” he said. “It could have evolved into a lot of bloodshed. You should thank the officers that they were able to negotiate a resolution and no one was hurt.”

“I can buy that you didn’t intend to harm anyone but obviously the firearms charge mandates two years in prison consecutive to what you get in the other charges,” the judge added. “Was it all worth it in the end? I heard your explanation and how felt the Indiana charges destroyed your life.”

“Once you abscond, you always have to be looking over your shoulder, you can never have a normal life,” he said. “There’s no way on God’s green earth that anything positive happened when you absconded. Maybe it did get blown out of proportion a little bit but you have to realize that you set the whole ball in motion when you absconded.”

CASSOPOLIS — The Cass County Board of Commissioners voted to urge Gov. Gretchen Whitmer to take a regional approach to... read more