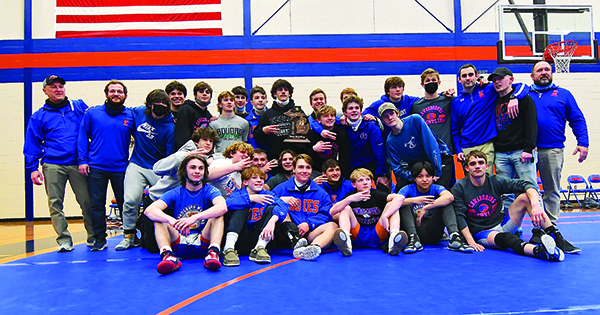 The Eddies defeated Sturgis 82-0 in the semifinals and then knocked off Coldwater 54-24 in the championship match Thursday night. The Cardinals edged Niles 37-30 in the other semifinal.

“I think we wrestled really well,” said Edwardsburg coach Jesse Becraft. “We’ve been improving a little bit on the stuff we’ve been working on this week, so that’s always fun to see. We were more aggressive tonight. We wrestled in better positions, so it was good.”

Like every school in the state, Edwardsburg has battled through adversity created by the ongoing pandemic to reach this point.

“It’s been pretty taxing season,” Becraft said. “Early in the season, we had a minor COVID breakout. We fought through that, came back and are starting to get back on the right path after that.”

Austin Peacock (140), Jackson Hoover (145) and Tanner Hursh (215), picked up pins for the Eddies in the final round. The achievement is just the latest from Becraft’s program, who has the 8-0 Eddies aiming for a postseason run in his fifth season.

“This year, we’re extremely senior-laden,” he said. “We have 10 seniors on the team who contribute. They’ve laid a great foundation for our young guys to know what we expect, what we’re doing and what the future holds.”

For Niles, the season ends with a tough loss to Coldwater. Andrew Hartman pinned Carter Collins at 145 pounds, and Carson Landon earned a win over Zach Lewis at 130 pounds. The young Vikings finish the season with a 3-8 record, but according to Niles coach Todd Hesson, the team has much to be thankful for this year.

“I’m amazed at how kids handle it, how schools handle it, and all the coaches regardless of sport,” Hesson said. “It’s an amazing situation. We knew going in to be appreciative of the fact that we have a season and literally that’s it, because we’ve got some kids that are not wrestling now that wish they would’ve. It’s not just us, it’s everywhere. So, appreciate the fact that you get on the mat, and that’s how we’ve approached it. I’m sure that that’s how all the coaches have.”

The Niles wrestling program is used to competing for championships. While the Vikings came up short this year, there are still lessons to be learned from the season.

“We’ve had a lot of good, a lot of success,” Hesson said. “You have to take the bad with the good. We’ve talked about it. We all enjoy it when we’re winning. Sometimes we’re not. We’ve been hurt the whole year by things beyond our control. This is not the end of the world.”

Edwardsburg moves on to the team regionals where it will face off against Lakeshore at 5 p.m. Wednesday at Gull Lake High School.

“We’re gonna have to clean up our mistakes and stay in better positions,” Becraft said. “If we capitalize on their mistakes and score more points than them, we will win.

BERRIEN COUNTY — A federal proposal could have a significant socioeconomic impact on the city of Niles. The Berrien County... read more