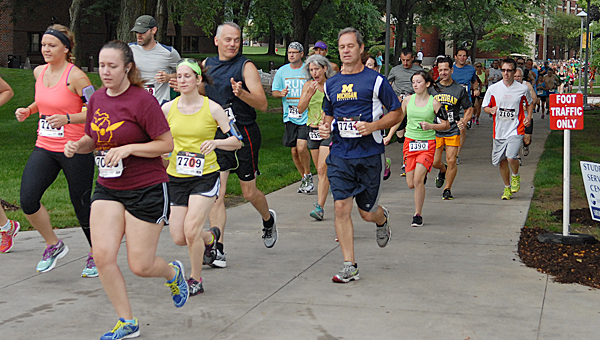 Steve’s Run returns to a live race, but is moving to October. (Leader file photo)

Steve’s Run moving to October, going back to live race

DOWAGIAC — Southwestern Michigan College’s 47th Steve’s Run returns with an in-person event sometime in October, with the precise date yet to be finalized.

“With President Emeritus David Briegel passing away in January, we thought it was more important than ever to uphold the tradition of the race,” said SMC President Dr. Joe Odenwald. “We want to postpone it for a few months to allow the pandemic to recede further and thereby maximize our chances for success. Also, we want students to be able to get involved with planning and participating in this important community service.”

The 2020 race was hosted virtually July 25 through Aug. 1 during the pandemic, but this year’s running will again take place on SMC’s campus course. Historically, the race began and ended in downtown Dowagiac up through 2014, then moved to campus in 2015. Timing and location will be re-evaluated for 2022, and the college is considering a move back to a downtown start in future years, if that is something the community desires, Odenwald said.

Steve was the son of David and Camille Briegel. The board of trustees in 2013 named the administration building after SMC’s fifth president, who served from 1981-1998.

The Original Road and Trail Race of the early 1970s became Steve’s Run in 1992. Steve graduated fifth in Dowagiac Union High School’s Class of 1986, participating in golf, band and basketball for the Chieftains, then graduated from SMC in 1988. He was a junior in Ferris State University’s SMC program at the time of his death on March 1, 1990, after a five-and-a-half-year battle.

When available, further details about the 2021 race will be posted at facebook.com/smcstevesrun.