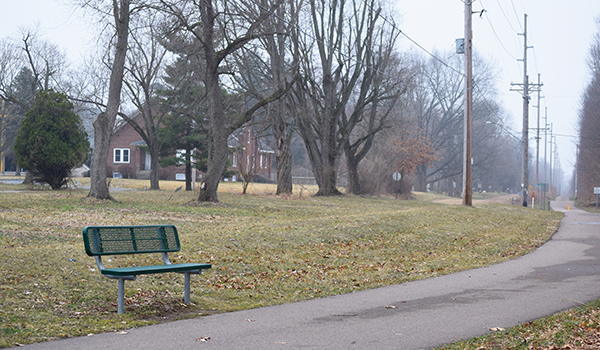 The Ontario Trailhead Project has moved forward to its next step after Monday night’s meeting. The project includes planning for a pavilion shelter at the location, 10 parking spots and a water source for those utilizing the trail.

The township board voted to match the $41,000 cost for the trailhead at the township location of the Indiana-Michigan River Valley Trail.

“The park board has agreed to spend $5,000 of their money for the next three years to help offset that $41,000, as well as seek donations to help pay for the township’s share,” said Clerk Terry Eull.

The $5,000 represents a third of the parks department’s annual budget.

The parks board was also granted the ability to apply for two grants from the state to help fund the project’s estimated $165,000 price tag. The grants being applied for would cover 75 percent of the projected cost

Both actions were approved.

“The first step is applying. The second step, if we do receive the grant, will be to match the funding,” said Treasurer Jim Ringler. “We won’t know until the end of the year [if the township received either grant].”
The construction would begin the following year.

In other news, one of the township’s grassfire trucks will be repaired after being involved in an accident. According Eull, the repairs will be made and the truck will be converted from having a work box and dual rear tires to being a flatbed with off-road tires.

“It will make it more of an off-road truck,” Eull said, which will be beneficial in fighting grass fires.

The township trustees also approved a bid of just under $82,000 for 26 sets of firefight turnout gear. The new turnout gear will include helmets, jackets, pants and boots. The gear will be used at both the north and south fire departments by all firefighters on duty.
“The other ones were worn out,” Eull said.

“We had eight applicants. All were volunteers with the department,” Eull said. “One dropped out. Two of them passed all of their [firefighter] tests.”

The board is currently working to schedule interviews open to the public this week with the two candidates. The board is hopeful to host them on Thursday.

The open position for a full-time firefighter was left by Acting Chief Tim Jesswein, who will assume the fire chief position after another firefighter is hired and his contract is finalized.

“He agreed to be acting chief until we hire his replacement and get that person on board,” Eull said.