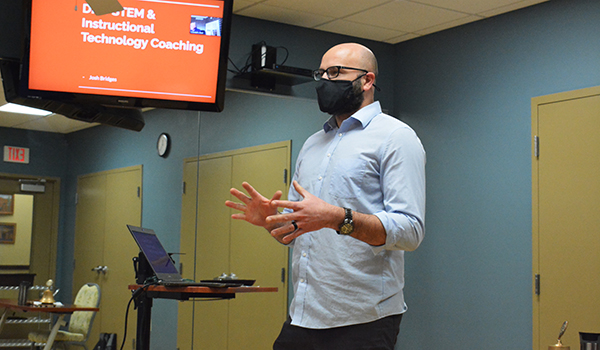 DOWAGIAC — The Dowagiac Rotary Club received a sneak peek at the goings on at Dowagiac Union Schools Thursday at Front Street Crossing in Dowagiac.

“Josh is an extremely talented member of our team who wears many hats,” Whan said. “He teaches a couple of classes at the middle school dealing with industrial arts and is expanding the kids’ experiences with 3D printing and other creative technological advantages. He is a terrific person and I’m glad he’s part of our team.”

“We started out with cutting boards, picture frames and jewelry boxes,” Bridges said. “We started out with pretty basic middle school woodshop projects. The students got a lot of hands-on experience. I only have two classes but those two groups that I’ve got they usually eat it up.”

The position is a natural one for Bridges, who owns a small woodworking business in Paw Paw.

“We do cutting boards, furniture and all kinds of stuff, so I keep myself busy,” he said.

According to Bridges, the class offers students a creative outlet to express their hands-on skills.

“They found out the first day that this isn’t a regular classroom,” he said. “You’re not gonna be sitting at your desk every day having me talk at you. We’ll do some instruction but you’re gonna do a lot of hands-on work. You’re gonna be touching equipment, you’re gonna be using saws, you’re gonna be gluing boards together, lots of different things you wouldn’t do in our other classroom.”

One of the projects Bridges had the students work on was using a machine to create wood carvings featuring their names. He said one of his students, in particular, took to the project very well.

“Every teacher I talked to said he was a handful,” Bridges said. “He was actually one of my hardest workers. He came in and he was the one that produced these signs for teachers, secretaries and different people that wanted them. I gave my class another order and he absolutely loved it, he ate it up. I actually got in trouble because I was gone for a couple days and the secretaries are like ‘your son had no idea what was going on.’ He was down in my room so much they just called him my son. ‘He was driving us crazy, why weren’t you here?’”

“I provide support and maintain our student information system, which keeps track of grades, attendance, discipline, all that kind of stuff,” Bridges said. “I’m maintaining that, which is a pretty big task, I train new teachers and current teachers on technologies in the classroom, so if we’re gonna start a new initiative, I’m usually on the planning committee to decide on it. Then I develop the training that will be used to train the staff on what we’re gonna be using.”

Last summer, the district decided students would be better served if it switched to a learning management system that was more robust than the physical classroom system that was used last year.

“I was part of the initiative to get it to get that planned and implemented,” he said. “We got that launched and that’s been going really well this school year.”

Bridges estimated that he has worked with every teacher in the district during his time there.

“I don’t think there’s a single teacher that I haven’t worked with whether it’s in a bigger group, a smaller group or one-on-one,” he said. “We have 125 teachers, so it’s a task.”

Several Rotary members were appreciative of Bridges’ work, bringing up the demand for trade jobs in the state.

“It’s a big concern right now because we have gotten away from that to a great extent,” said Rotarian Dick Judd. “Not everyone needs to have a four-year degree to be successful. There are jobs out there just crying in Cass County and all over southwest Michigan that are unfilled. Parents and vocational instructors need to show and tell the kids what opportunities there are out there. Because there are a lot of good-paying jobs going unfilled and companies are moving out of state.”

NILES – On March 2, Ring Lardner Middle School students participated in the final qualifying round for the Berrien RESA’s... read more