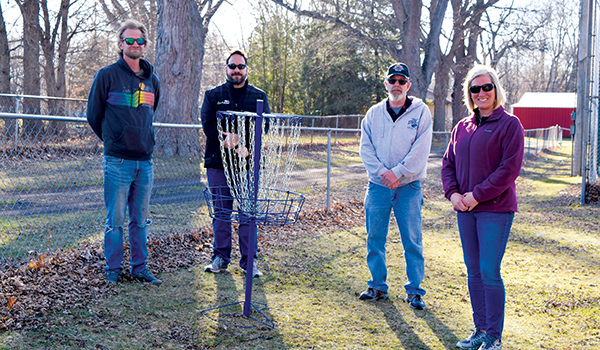 HOWARD TOWNSHIP – A nine-basket disc golf course is in the works for Jones Memorial Park in Howard Township.

Throughout the past year, Jimm Showman and Sebastian Boling, two area residents, began traveling around the area to play different disc golf courses. Boling found the lack of courses nearby to be disheartening, but also saw potential in a park he lives near.

“My biggest concern was really park utilization,” Boling said. “I thought if we have a beautiful park, and if we have the ability to install a course at a good rate, why not take advantage of what we have and move with the times a bit?”

Boling and Showman first brought the idea to the township parks board in November.

“There wasn’t even hesitation,” said parks board member Erika Pickles. “This is pretty much just them doing it. They just had to come to us for approval. We were excited from the first word.”

Boling is working to get local business sponsors for the course.

“We are waiting for funding so that it is not the tax payers’ money being utilized,” Boling said. “This is going to be privately funded, so that it’s free for everyone.”

Many of the disc golf courses, like those at Madeline Bertrand County park and George Wilson Park, in Mishawaka, cost between $4 to $10 to play, when combining park fees. Boling wanted to find a way to keep the activity fully accessible to as many residents and players as possible.

“Our parks need upgrading. This was one of our short-term goals,” Pickles said. “This is the boost that we were kind of looking for. We thought ‘this is amazing.’ We hit the ground running from here.”

Boling said everyone he had talked to at Howard Township had been supportive.

Pickles and Howard Township treasurer Mike Gordon said that none of the rest of the park’s equipment or fields are planned to be removed.

“They can play around it,” Gordon said.

Mishawaka Parks Department representatives came out and walked the course with Boling and members of the township to provide input on the layout.

“They actually liked it a lot,” Boling said.

After enough funding is raised, the poles, baskets and chains will be purchased and installed around the park. The tee off spots will have pavers marking the spots until the course is perfected. After it is finalized, concrete slabs will be poured to mark the areas for disc golfers.

Boling is currently gathering sponsorships of the course and holes. Each sponsorship currently is planned to remain in place for a least two years, as the equipment is not anticipated to need replacing any sooner than that.

A large 5-foot by 4-foot metal sign outlining the course and rules will have business sponsors all around the sign that visitors will see. To sponsor the park on the sign is $500. A business or family can sponsor one of the baskets, or holes, for $250.

Those interested in sponsoring the Jones Park Disc Golf course may contact Erika Pickles at ERPickles@gmail.com. Checks can be made out to Howard Township.

Boling hopes when the course is ready to open, they will be able to host a disc golf tournament to celebrate.

CASSOPOLIS – A Dowagiac man who stayed in jail because he wanted to stay sober was sentenced to credit for... read more