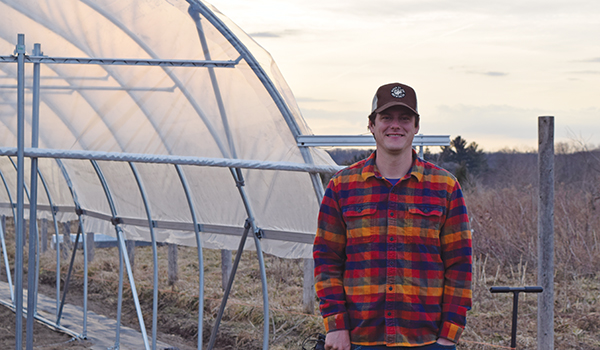 Flatwater Farms is located at 15475 Walton Road in Buchanan. Looking toward spring, and getting busier every day as temperatures warm, Luff has also brought with him a new concept to the farm – a market-style community supported agriculture program.

Those who buy shares and support the CSA will be able to shop the farm’s market and produce first through designated days through the week.

“Ideally, it’s a mutually beneficial relationship,” Luff said. “Farms are so capital intensive. Basically, people will buy in at the beginning of the season, which helps our operating capital for the season. Then, they get the top choice of certified organic veggies, fruits and meats.”

He said membership is a way to enjoy a return on investment. The CSA investment at the beginning of the season translates to contributing to between 10 and 20 percent of the produce costs members would use each week

“The more you buy in, the more return you get on that investment,” Luff said. “You can come and use your [CSA] card either on the produce cart on non-CSA pickup days, or on pickup days.”

Luff said the program is akin to a produce subscription in some ways. Instead of being given so many of each vegetable or fruit, this gives the member the choice of which produce they buy.

The plan for the produce carts is to have them be along the entry to the brewery and restaurant.

Watching the brewery, River Saint Joe, which sits on the farm’s property, engage with the community throughout the past year, Luff is hoping to bring the Buchanan community into the farm itself a bit more.

“I think it will be neat for people to see the changes happening outside, with the choices they are making with the beer they choose,” Luff said.
Currently, the outdoor dining and recreation areas of the brewery overlook the hop yard and fields flowing beyond fences of the beer garden. Luff is already working to build mobile greenhouses to get seeds started and plants protected throughout the growing seasons. He has plans in the works for a “food forest” eventually, to help lend a productive boundary to the property.

The farm will also, eventually, be bringing in animals to produce beef, pork, lamb, turkey and eggs.

“This is a part of a renewed goal to supply the kitchen with local products,” Luff said. “You can come and pick up your beer and your veggies at the same time.”

The CSA also seeks to build community relationships between members and the farm itself.

Luff has about 13 years of farming experience.

He discovered his passion for the work, and connections to the community, through an unconventional path. After attending Harvard University for his English degree, he planned to pursue law. He took a two-week break to look for other work and found himself working on an organic farm in Indiana.

“We grew and processed all sorts of organic grains and livestock,” Luff said.

Afterward, he moved to Cincinnati and learned market gardening.

“My wife, Claire, and I started our own business which we ran for eight years. That’s where we came up with the market-style CSA,” Luff said. “It helped us startup from scratch with no money to get it started.”

After the property was eventually bought and developed by the city, Luff worked in California on an 8,000-acre ranch.

Through a conversation with his college rowing coach, he was connected to Fran Tuite, owner of Flatwater Farms.

“That’s how it all started. That’s how we came back [to the Midwest],” Luff said.

The CSA is paired with a Community Supported Brewing share offering through River Saint Joe.  Structured similarly, members will be able to invest in the CSB, and receive discounts for a specific number of refills of a crowler or growler.

More information on the CSA and CSB is available at FlatwaterFarms.com/csa-csb-about.