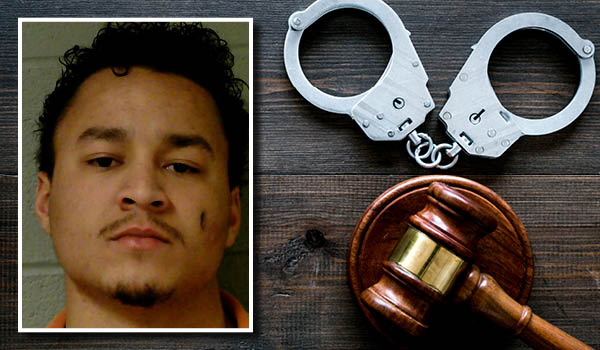 CASSOPOLIS — A Dowagiac man who cut off his electronic tether last fall is going to be spending more time in jail after being sentenced Friday in Cass County Circuit Court.

Zachary Ryan Williams, 24, of Cherry Grove Road in Dowagiac, pleaded guilty to tampering with electronic monitoring and was sentenced to 330 days in jail with credit for no days served. He must pay $1,548 in fines and costs and $690 in restitution for the cost of the tether.

Williams is currently on parole from a 2019 assault by strangulation or suffocation conviction out of Ottawa County. Cass County Circuit Judge Mark Herman ordered that Williams can serve his jail term in any correctional facility.

The incident occurred Sept. 21, 2020, in Dowagiac when he cut off the electronic monitoring device and absconded from parole. By the time he was picked up by police in Dowagiac in December, he had amassed charges in Arizona, Missouri and Berrien County.

“I have some pretty big concerns,” he said. “He was given a chance for freedom and he decided to throw it all away by cutting off his tether. He used alcohol every day while he was absconding.”

Defense attorney Robert Drake noted that Williams has “a lot of business to unwind” with the other charges he faces here and in other states.

“He’s not going to just be walking out the door,” he said.

Williams admitted that he has been wasting his life away the last few years and making bad decisions.

“This is the first time that I’ve gotten help,” he said. “I want to move forward, I know I have a lot of potential to do good things in my life.”

Judge Herman called it disheartening to see what Williams has done with his life.

“You seem pretty out of control. You’ve already been to prison,” he said. “It’s disheartening to see what you’ve done. You’re certified as a nutritionist, you excelled in sports and academics but you let your impulses get the better of you.”

“You can make changes, but you need to get on board quickly,” the judge added. “If you don’t change, you’re going to spend a lot of time behind bars. Subsequent convictions will increase your guidelines to a prison sentence. That’s just the reality of it.”

Two other area residents were ordered to complete the Adult Treatment Court program as part of their sentence.

Michael Joseph Fritsche, 32, of U.S. 12 in Edwardsburg, pleaded guilty to possession of methamphetamine and was sentenced to three years’ probation, completion of Adult Treatment Court, credit for nine days served, one-year license suspension and $2,628 in fines and costs.

He also had his probation continued and given credit for 12 days already served for violating his probation from a 2018 conviction for possession of methamphetamine.

In the current case, police stopped him April 30, 2020 in Howard Township. A police search of his vehicle found a meth pipe and other items.

“You’re 32 years old, and this is your second felony conviction,” Judge Herman said. “You’re still living in Edwardsburg with your mother. It’s time to grow up, act like a man, get a job and support yourself. Part of the problem is that you have no responsibilities.”

Katrina Marie Rice, 41, of Lester Street in Dowagiac, pleaded guilty to possession of methamphetamine as a habitual offender and was sentenced to three years’ probation, completion of the Adult Treatment Court program, credit for three days served, one-year license suspension and $2,628 in fines and costs.

The incident occurred July 29, 2020, in Edwardsburg where police found drug paraphernalia including a meth pipe, scales and meth residue during a search of the home.

“You are 41 years old, and this is your third felony conviction, all for possession of meth,” Judge Herman said. “With these priors, your next conviction will lead to harsher and harsher penalties. The guidelines today would permit me to send you to prison, I hope you keep that in mind.”

“You need to get your act together,” he added. “You can’t change what you did in the past, but you can move forward and change your life for the better. … I hope you’re serious about changing your life. If not, prison is on your horizon.”

• Richard Owen Kapiszka, 35, of South Bend, pleaded guilty to conspiracy to commit larceny over $1,000 and less than $20,000 and was sentenced to credit for 86 days served and $1,608 in fines and costs. The incident occurred Aug. 3, 2020, in Mason Township. Kapiszka also faces charges in Indiana.

• Ingvar Korogodsky, 33, of Union, pleaded guilty to possession of methamphetamines as a habitual offender and was sentenced to two years’ probation, credit for 46 days served, one-year license suspension and $2,268 in fines and costs. The incident occurred Sept. 15, 2020, in Newburg Township.