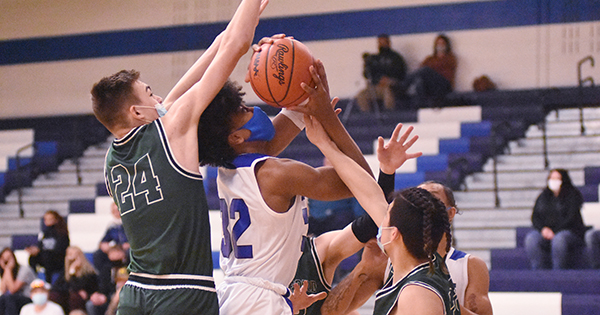 Cassopolis’ Davion Goins is fouled as he goes up for a shot against Hartford Tuesday night. (Leader photo/SCOTT NOVAK0

CASSOPOLIS — After a slow start, host Cassopolis poured it on in the second and third quarters of their 54-22 Southwest 10 Conference boys basketball victory over Hartford Tuesday night.

The Rangers outscored the Indians 37-10 in the middle two quarters to turn a 9-6 advantage into a rout. The win kept Cassopolis atop the league standings with a 5-0 record. The Rangers are 5-1 overall.

“We have got to see a lot people playing who we wanted to see play, and they are playing well,” said veteran Cassopolis Coach Ricky Evans, whose squad has now won three straight following its lone loss of the season to Brandywine on Feb. 20. “Like we keep telling them, defense turns into offense. If you play good defense, the rest takes care of itself.”

Cassopolis senior Ashan Hart spearheaded that defense in the first half. Hart created numerous turnovers, which led to easy Ranger baskets. At times, it appeared that Hart was everywhere, and Hartford could not get into its offensive flow because of it.

“This is by far the best game he played this year,” Evans said of Hart. “He was everywhere.”

In the second quarter, Cassopolis outscored the Indians 17-1, which led to the Rangers leading 26-7 at halftime. The Rangers knocked down some outside shots and were able to speed up the pace of the game.

Cassopolis did not let up in the third quarter, as it poured in 20 points and led by 30, 46-16, ending the fourth quarter.

R.J. Drews led the Rangers and all scorers with 13 points. Cassopolis also got nine points from Logan Pflug, eight points from Daishean Jamison and seven points each from Hart and Davion Goins.

Hartford did not have a player reach double figures. Kaden Johnson led the Indians with seven points.

The Rangers are back on the court Friday night as they host Cass County rival Dowagiac in a non-conference game slated to begin at 7 p.m.