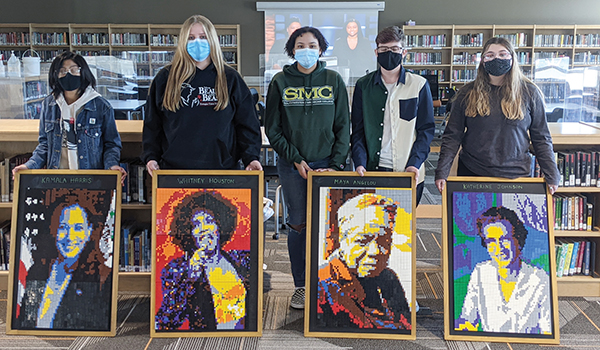 For the project, students had to translate a photo into a pixelated image, grid the design and recreate it two-dimensionally with Lego bricks and a base plate. Each student in each group was responsible for a section of one of the mural designs. 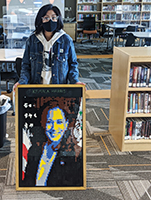 “I let the students decide who they were gonna celebrate with Lego murals,” Dwyer said. “They were placed in groups, they all did presentations and then we did a vote to decide who the four people we would celebrate would be. I was really happy with their choices this year because every year we try to pick different people instead of doing somebody over again.”

The project required students to use skills like mathematics to solve problems involving measurement and addition when constructing a Lego portrait mural. Each group of students classified and sorted objects into categories, reasoned with shapes and their attributes, and generated and analyzed patterns to create an accurate design.

“We had to count out our pieces,” said student Hannah Christner, whose group created Katherine Johnson. “A lot of my pieces were singular pieces. All over the board were singular colors here and there. It was really hard just counting your Legos to get it to match what was already up there.”

“Making sure the colors were right was tough,” said student Keyan Sullivan, who along with Daija Conley, helped his group construct Maya Angelou. “In the first half of my plate, I had mixed up the brown pieces with the black pieces so I did all the pieces that were supposed to be brown in black and I kept wondering ‘why do I not have enough black pieces.’ Just making sure everything was right was a challenge.” 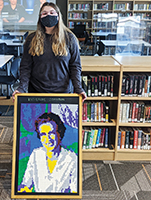 Groups also had to create an informational flyer to be displayed next to the murals so viewers can gain insight as to how each subject depicted in the mural contributed to history.

“Whitney was an inspiration to so many people,” said Hayley Jones, whose group constructed the iconic pop star. “I wish I had heard about her before this project.”

“I didn’t know much about Katherine Johnson,” said student Sashenka Cruz. “I watched ‘Hidden Figures’ and realized that she was an amazing person.”

The students enjoyed the group aspects of the project.

“We actually had separate plates this year,” Conley said. “We were able to help each other out and get Legos for each other. When we did this in sixth grade, each group was working from one plate. It’s nice now because we actually get to enjoy the project more.”

The concept of Lego murals came to Dwyer when she was an art teacher at Dowagiac Middle School a few years ago.

“I was poking around online and saw some different Lego murals of objects and things,” she said. “I thought about what I could do for February and Black History Month, so I figured we co 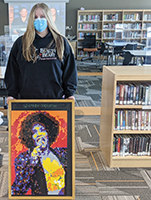 Dwyer then applied for and was awarded a grant in order to pay for the necessary number of Legos.

The Lego murals are currently displayed in the student media center for other students and visitors to the building to appreciate them. Seeing her students’ hard work come to fruition has been Dwyer’s favorite part of the project.

“I think just seeing the design come together is just great,” she said. “Just as we start adding the plates together and everything starts coming together.”

The project is the latest for Dwyer, who has had to navigate through being an art teacher during the pandemic. 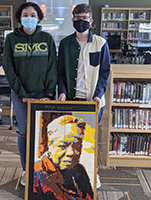 “I’ve had to create supply kits for each individual student,” Dwyer said. “They’re responsible for bringing it to school so that they’re only touching their own supply. They now have one-to-one computing so they all now have their own computer, which has been a benefit because it’s helped us when we have to go distance learning. It’s much better to have them in person and to do group projects, especially if they’re creating a group art project together. You can’t really go to each other’s houses and pass it around, so I’ve had to make adjustments to the curriculum and make up for that. Whenever we’re together in person, we can actually create these projects.”

DOWAGIAC — The saying “being a twin is like being born with a best friend,” is one that twins Ronda... read more