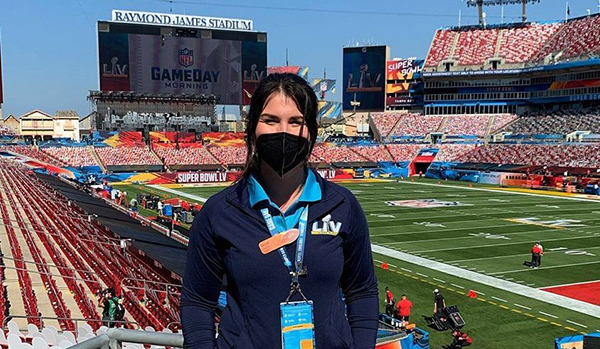 The Trine University sport and recreation major spent 10 days in Florida in a program sponsored by Living Sport, a reimagined sport study abroad program that gives aspiring sport industry professionals the chance to receive international and domestic work experience and the opportunity to explore the world through sport.

“Being in Tampa during the Super Bowl was incredible!” Maroney said. “The atmosphere was electric, and the people were so excited to see their hometown team playing in one of the biggest sporting events.”

“I learned a lot about myself. and I wouldn’t trade the experience for anything in the world,” Maroney added. “The people I shared the experience with are some of my closest friends and I look forward to seeing where we take the sports industry as the next generation as leaders. I gained knowledge and experience that I wouldn’t get anywhere else.”

Exploring her options to transfer to a “school that was similar to SMC” last spring, Maroney discovered Trine in Angola, Indiana.

“When I got to Trine, I joined the Sports Management Club, where we have guest speakers come in and talk to us about their journey in sports and what jobs they hold today. I started to connect with many sports professionals, and I realized that there are so many jobs that you can do within the sports industry.”

During a Sports Management Club meeting, Professor Brandon Podgorski announced the opportunity, she knew she had to jump on it.

“There were about 40 students, including myself, on the trip. We came from all different colleges and different levels of education — undergraduate, master’s and recent graduates. We stayed in Airbnbs near downtown Tampa,” she said.

Tampa received attention in 2020 from not only Tom Brady’s Buccaneers knocking off the defending-champion Kansas City Chiefs, but the Rays met the Los Angeles Dodgers in the World Series and hockey’s Lightning captured the Stanley Cup.

“I am more of a hockey fan than anything else,” said Maroney, who played in high school, “but during the regular football season I root for the Bears. This year I was cheering for the Buccaneers” at her first NFL game.

Maroney was stationed at the “NFL Draft” attraction, where fans get selected to their favorite teams and walk across stage while their names are announced.

She also “worked at Julian B Lane Park, which housed the Super Bowl Museum, which held lockers from different teams, bedazzled helmets, Super Bowl rings, AFC and NFC championship trophies, as well as a few art installations. The park also held the Lombardi trophy, where you could go and take pictures with it.”

During the game itself, “I was able to catch glimpses from a TV outside a food stand,” Maroney said. “You could tell what was going on during the game because of the excessive cheering or booing. We were able to watch some of the halftime show” featuring the Weeknd.

“I usually watch the Super Bowl on television. This time around it was so unique to see the whole picture instead of just the different camera angles that they use on TV. I saw quite a few famous people, but I had to freak out internally because I was in uniform and working the game,” assisting fans with their mobile apps, directing them to food, stores and their seats.

Two years ago this month, she was organizing a Special Olympics basketball tournament at SMC.

Maroney attends in Angola, as Trine is still in-person for a majority of classes, “which is nice because things feel as normal as possible.”

“I am planning on returning to SMC for commencement in May,” she said. “When I graduated, it was heartbreaking to know I wouldn’t be walking across the stage and receiving my diploma because that is something every graduating student looks forward to.”