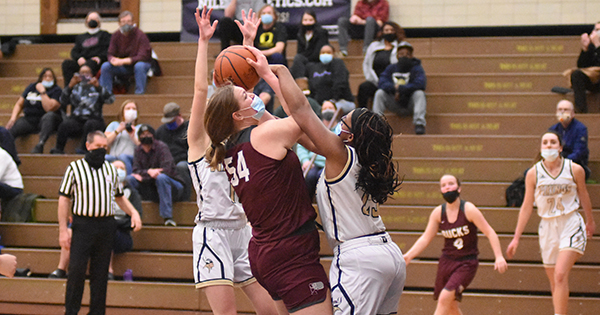 NILES — The battle for first place in the BCS Athletic Conference Red Division turned into a war at Niles High School Friday night.

Visiting Buchanan and Niles entered the showdown with unblemished division records, while the two teams were a combined 8-0 on the season.

The Vikings came into the game short-handed as leading scorer Amara Palmer remains in a walking boot due to an ankle injury sustained against Paw Paw. Niles would also be without Brynn Lake and Ayshia Smith.

Niles barely missed a beat as they battled the Bucks tooth and nail for the entire 32 minutes before falling 55-48.

“I was proud of the girls,” said Niles Coach Jessica Johnson. “It is tough to come up short, but I think the girls played their butts off. I was actually happy with the way they played.”

Veteran Buchanan Coach Gabe Miller expected Niles to give his team its best effort, so he was not surprised by how the Vikings played, especially junior point guard Kamryn Patterson, who scored a game- and career-high 26 points.

“I do not think I have ever had an easy game against Niles,” Miller said. “It is kind of like Brandywine. Patterson, we had a tough time covering. She has 17 points in the first half. The press started OK, but then we pulled out of that. I think once we switched out of that and freshman Hannah Herman did a good job of making her work, we knew with their injuries that they lacked depth. I think that is where the game turner for us.”

Johnson was equally impressed with her point guard.

“I love her confidence,” she said. “Like Alycia, I would leave her in that game the entire time if I had no choice. But in the end, it really hurt having some of the girls out.”

Patterson poured in 10 first-quarter points as Niles (5-1, 2-1 Red Division) took a 15-10 lead. Patterson added seven more points in the second quarter, but the Bucks regrouped and outscored the Vikings 17-11 to take a 31-26 lead at halftime.

Niles could not stop the inside game of the Bucks, which means 6-foot-3 Faith Carson, who had eight points in the opening quarter, but had to sit on the bench for most of the second quarter due to foul trouble.

The Bucks were able to catch and pass the Vikings in the second quarter, thanks in part to the play of freshman Labria Austin, who came off the bench to hit a 3-pointer and added a pair of baskets.

Carson scored 10 points in the third quarter when the Bucks (4-0, 4-0 Red Division) extended its advantage on the Vikings. Buchanan took a 43-33 lead into the fourth quarter.

The lack of depth due to the missing players finally caught up with Niles in the fourth quarter. Buchanan continued to pound the ball into the post and kept the game’s pace quick to wear down the Vikings.

Niles would make one last run at the Bucks in the closing minutes of the contest, but Buchanan was able to maintain its composure and knockdown key shots and free throws to keep the Vikings at bay.

Carson led the Bucks with 15 points, while Austin finished with 13 and Hailey Jonatzke nine.

Besides Patterson’s output, Niles got 10 points from Amirah Lee and seven points from Bailey Bickel.

“She [Lee] is a strong player,” Johnson said. “Her work ethic is so good. She is going to give you her all the whole time. I really thought she did a good job against Faith Carson.”

“Bailey played well all-around,” she said. “I like getting her to the line because her free throws are usually right on.”

The Bucks were back in action on Saturday at Bloomingdale. Buchanan travels to Benton Harbor on Tuesday for another non-conference contest.

Niles was also back on the hardwood Saturday as it traveled to Mattawan to face its former SMAC foe. The Vikings will travel to Stevensville on Monday to face another former SMAC opponent in Lakeshore.

It will be the second game between the two teams in nine days.