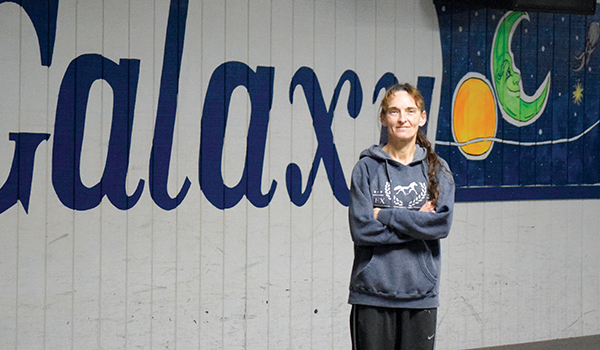 NILES – A Niles roller skating rink was able to take the chains off its doors and reopen to a limited number of skaters last
weekend.

Amy Kidwell, owner of Galaxy Roller Rink, 1120 Ontario Road in Niles, was allowed by a Berrien County judge to take the chain off her business’ entryway and take down the caution tape across the parking lot that had been there since early January.

Standing in her business earlier in the week, Kidwell’s phone rang as patrons called to inquire about booking private parties and skating policies. She navigated the schedule easily, as someone who has grown up with the skating rink in her family. She looked on at a new mural painted by a young artist who donated her time and material to put up new artwork on one of the walls of the skating rink.

“I have my heart and soul here. I’ve been born and raised here. This was my parents’ place. I bought it from them three and a half years ago. They’ve retired, and I wanted to keep in the family,” Kidwell said. “I have a good following. These kids [who come skate] are my kids. They consider this home. They get to come here and relax and be kids.”

In a Facebook update to the Galaxy Roller Rink of Niles page on Feb. 19, Kidwell updated her patrons of the latest development on their ability to reopen.

“I should have had my day in court on Tuesday, [Feb.] 16. Well, since the snow was cause for the Zoom hearing to not take place, I was forced to wait for the judge to sign the latest agreement that the attorneys worked out,” Kidwell said in the update. “After bargaining with many of my rights that been taken from me, I had to agree to these terms.”

The measure is the latest in what started in December, as the Berrien County Health Department took Kidwell to court over opening against Michigan Department of Health and Human Services epidemic orders.

Legal complaints filed on Dec. 17 by the Berrien County Health Department show a tip that the roller rink was open on Dec. 4, another on Dec. 11, and intent to reopen later dates was found on the business’s social media page.

According to Kidwell, her business has been monitored constantly during the proceedings. Around the snowfall on Feb. 11, she had to enter the skating rink after noticing water leaking into the roof.

“I had three huge water leaks. The ceiling tiles fell. I took the chains off my doors for the first time since Jan. 8,” Kidwell said. “I had three big trash cans full of water. My lawyer is in Lansing, and within two hours of messing around outside with my construction stuff, he knew that I had my chains off my doors.”

David Kallman is representing Amy Kidwell and Galaxy Roller Rink. Kallman represented Karl Manke in 2020, the barber in Owosso, Michigan, who opened his shop against shutdown mandates in May.

When she returned to the skating rink on Friday, Feb. 18 to open the business, as allowed, she said she arrived to the parking lot to find a Berrien County Sheriff’s deputy in the parking lot.

After speaking again with her lawyer and Berrien County Assistant Prosecuting Attorney Jerry Vigansky about the incident, Kidwell said one of the criminal charges against her was dropped.

According to Kidwell, she still has to be granted permission to leave the state of Michigan. She said this limitation will make it harder to run errands to stock her business.

A July 2 court date still lies ahead for Kidwell and the roller rink.

She is currently allowed 45 patrons inside the building. It is enough people to book small parties and to open on a first-come, first-served basis where the number of people inside must be monitored by her.

Prior to COVID-19, Kidwell said Fridays and Saturday nights would average her between 180 to 200 skaters coming through the doors. The capacity, set by the fire marshal, is 357.

“Usually, I do a really good business,” Kidwell said. “I have a very good following.”

It is that following that she said keeps her going through the challenges.

“The outreach from the community has been phenomenal,” she said.

A GoFundMe account was set up in the rink’s name for legal fees and reached more than $18,000 in donations. Kidwell said she has not touched the money and is trying to reopen to give her employees income and pay the bills. With health challenges herself, Kidwell has moved back in with her parents for now as she works part-time as a nurse.

“I’m working to pay the bills here, to keep the bank from coming and taking stuff. Now that we’re open, I’m just going to start dumping the money back into the bills,” she said.

Representatives from the Berrien County Courts could not be reached for comment on this story.

SOUTHWEST MICHIGAN — Michigan Works! is issuing a call to action to the community to fill out a six-question survey... read more