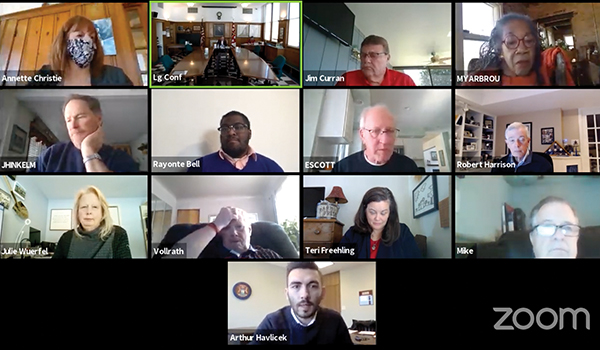 The declaration took place Thursday, as the Berrien County Board of Commissioners voted to send a message to Michigan Gov. Gretchen Whitmer and to members of local municipalities of the county regarding COVID-19 restrictions and to promote patronization of restaurants.

After discussion of taking a measure at last Thursday’s Berrien County Board of Commissioners meeting, the commissioners unanimously passed two resolutions, the first aimed at communicating the commissioners’ concerns to Michigan Gov. Gretchen Whitmer about regionalizing COVID-19 restrictions and the second about promoting cashflow to local restaurants.

Southwest Michigan Regional Chamber of Commerce President Arthur Havlicek gave a presentation to the commission members, which included support and discussion of both resolutions the board was preparing to pass.

“As the voice for business in the region, our chamber is strongly encouraging you to adopt the resolution urging the governor to institute a new regional approach to restrictions. While genuinely empathetic toward Gov. Whitmer for the weight of responsibility she’s carried, the simple truth is that her administration has not always gotten it right,” Havlicek said. “We are the point in this fight against COVID-19 where we can adopt a more thoughtful approach.”

He noted the quick response of businesses to help to curb the spread of the virus, especially in the beginning, as well as the drop in hospitalizations in the county.

“Our neighbors in Indiana, Illinois, Ohio and Wisconsin all have clear, metric driven road maps for their businesses and citizens to follow,” Havlicek said. “Indiana actually sets out restrictions on a county by county approach.”

Commissioners spoke in support of Havlicek’s message, and posed questions about the chamber’s approach and support toward the regional approach to COVID-19 mandates.

“Recently, our counterparts at the Greater Niles Chamber of Commerce and Niles Downtown Development Authority partnered to declare March 1 through 7 the first ever Restaurant Week in the community of Niles,” Havlicek said. “I think this is a phenomenal idea, and will go a long way in driving much needed consumer spending in that area and for their struggling restaurant operators.”

Havlicek said the chamber had been working with the health department even before Michigan declared its state of emergency, and was planning to continue working with their team to ensure a safe reopening of restaurants.

Commissioner Ezra Scott said he would support the resolutions on the agenda, but wanted them to be a step toward reopening businesses fully.

“I have to say, that I cannot agree with a 50 percent [reopening capacity]. I have to agree with 100 percent. In July of last year, we were open at 100 percent, and our numbers were where they’re at now. We’re at 3 to 5 percent [positivity],” Scott said.

“If you wanted to put 100 percent in the resolution, I would be 100 percent supportive of that. I think we can get there, and I think we can do that safely,” Havlicek responded. “There would be no small businesses if it weren’t for the folks running those establishments.”

The commissioners noted the downward trend of COVID-19 in the area, and recognized front-line workers, first responders, citizens and business owners who have followed mitigation measures, according to the opening of resolution B2102151.

“The Berrien County Board of Commissioners addressed the need to regionalize the response to COVID-19 in a letter to Gov. Whitmer in April of 2020, recognizing that what is necessary of some areas of our state may not be necessary in southwest Michigan,” said the resolution. “Those of us in border counties have seen a magnified effect on our economy due to our citizens being able to drive a short distance to Indiana, where the restrictions are less.”

In closing of the resolution, the commissioners called on the governor to implement a new, regional approach to mitigation techniques “that values local input, takes cases, vaccinations, seasonality and the regional differences into consideration, and sets clear benchmarks for the easing of restriction on businesses of the public to follow.”

Resolution B2102317 outlines the loose timeline of restaurant closures, beginning with the arrival of COVID-19 and the heavy mandates in March 2020. The discussion came to light in the last meeting when commissioners were made aware the current restaurant restrictions, including 25 percent capacity limits and closing by 10 p.m., were extended quietly to remain in place until March 29.

“Many businesses have been unable to obtain state or federal financial aid, or the financial aid they received was insufficient in the face of additional unanticipated state-mandated closures and restriction,” the resolution said.

The resolution notes that consumers have sought “respite in less restrictive markets” such as northern Indiana, where such heavy mandates on dining do not currently exist.

“[This results] in additional significant revenue losses for Michigan businesses in border counties like Berrien,” the resolution said.

Included in the resolution is data from the Michigan Restaurant and Lodging Association showing 3,000 restaurants in Michigan have permanently closed. The data shows that the closure resulted in 200,000 lost jobs, and also notes about a third of restaurant operators said it is “unlikely” their restaurant can remain in business six months from the present.

In the resolution, the Berrien County Board of Commissioners declared March 2021 to be “Restaurant Month” to encourage citizens to give their business, for dine-in and take-out, to area restaurants, in hopes to spur an “infusion of funds” to the local economy.

Following Thursday’s vote, the board will forward the resolution to local municipalities to encourage similar action.

“[The] Berrien County leadership will continue to appeal to the governor’s office for an increase return to safe indoor dining which will allow for a beleaguered industry to aim for economic recovery while also fostering community building and positive social interactions after a year of isolation,” said the resolution.