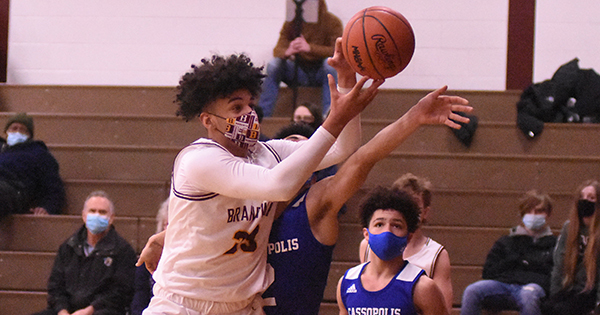 Brandywine playing well against some of area’s top teams

NILES — The realities of how condensed the winter sports season will be are beginning to set in on area coaches.

The Brandywine boys basketball team played four games in six days and came away 4-2 against some of the best competition in southwest Michigan — St. Joseph, Buchanan, Cassopolis and Benton Harbor.

The Bobcats suffered a pair of book-end losses to St. Joseph (62-61) and state powerhouse Benton Harbor (62-54). In between were wins over arch rival Buchanan (61-51) in a key BCS Red Division and perennial district foe Cassopolis (74-46).

On Saturday night, the Bobcats and Rangers met for some unfinished business. Brandywine and Cassopolis were scheduled to compete for the Division 3 District championship last March when COVID-19 forced the postponement, and eventually, the cancellation of the remainder of the winter sports season.

Although some of the players have changed, both teams had a chance to find some closer to the 2019-20 season.

Brandywine enjoyed the better of it Saturday night at the Bobcat Den as it raced out to a 16-8 lead and never looked back. The Bobcats enjoyed an 18-point halftime advantage (39-21) and led 51-28 heading into the fourth and final quarter.

The Rangers finally ran out of gas in the second half as they played for the third consecutive night to open their 2020-21 campaign.

“We handled the pressure,” said Brandywine Coach Nathan Knapp. “We started to let them back into a bit, but then we put them away. We grew up a lot.”

Nate Orr and Kendall Chrismon led a balanced Brandywine offense with 12 points each, while Jamier Palmer and Caleb Byrd both chipped in with 10 points. Jeramiah Palmer, Carson Knapp and Gabe Gouin all finished with six points.

The Bobcats had the visiting Benton Harbor Tigers right where they wanted them Monday night.

All Brandywine wanted was a chance to upset Benton Harbor. With 1:34 remaining in the contest, the Bobcats trailed the Tigers 56-54 with Benton Harbor shooting free throws.

The Bobcats were unable to capitalize on three missed free throws by the Tigers, who were able to come up with an offensive rebound each time and hang on for the 62-54 victory.

It was the little things, according to Knapp, that cost his team in the end.

“We gave up a lot of offensive rebounds in the first half too,” he said. “We were not diving down in rotation on the backside. They [Benton Harbor] are quick. It was a quicker-paced game, but I was really happy with the way the kids played and battled. That is all you can ask for.”

With a few adjustments during the break, the Bobcats were able to battle their way back into the contest, cutting the lead to nine points, 51-42, heading to the fourth quarter. Brandywine continued to whittle away at the Tigers’ advantage, getting it to four points in the contest’s closing stages.

Chrismon and Byrd scored 16 and 15 points respectively for the Bobcats, who also got eight points from Knapp.

Kentrell Pullian led the Tigers and all scorers with 22 points.

Brandywine hits the road and returns to BCS Athletic Conference Red Division play Friday night as it heads to South Haven for a 7 p.m. tipoff.