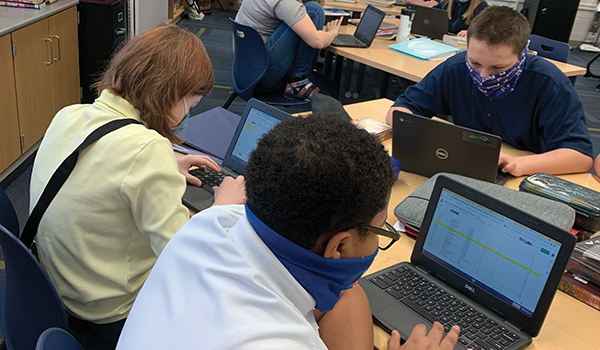 NILES – Eighty seventh and eighth graders at Eastside Connections School are researching a putting together a virtual museum in honor of Black History Month.

As February arrived, Shanna Lamberton, a middle school language arts teacher at Eastside Connections School was looking for a new way to get her students engaged in black and African American history.

“[The students] know Martin Luther King, Jr., Rosa Parks and many athletes, but what I really wanted to do was find a list, or create a list, of black Americans and African Americans, historical and current, that we don’t know about and should,” Lamberton said. “I took quite a while to research. I was looking for black authors who put together this list. I compiled a list of people I hadn’t even heard of.”

The front page of the virtual museum displays eight different “exhibit rooms,” where a user can navigate to learn about Civil Rights leaders, singers and songwriters, athletes, abolitionists, political figures, authors, actors and actresses, and leaders in their fields.

Lamberton described the project as a sophisticated Google Slideshow, where users will be able to navigate through slides by going to different “exhibitions” where photos will be “framed” on the walls. There, users can click on each photo to be taken to another slide to read about the person, see photos and in some instances, watch videos.

As an educator searching for new ways to keep language arts engaging for her students, Lamberton found another educator who had their class put together a virtual museum presentation. She had heard of a “living museum” type project, as well, where parents would attend and learn from students dressed as a figure, who could recite historical facts or speeches from the figure.

“I noticed there are a lot of famous museums that have gone virtual, as well,” Lamberton said. “It all just stemmed from that.”

Another reason for the online format was the ability to stay flexible with COVID-19 mandate changes and mandatory quarantine periods.

“We have a big push for technology in the schools, being prepared for virtual learning,” she said. “I think it’s important that we find different ways of working online and publishing [students’] work for people to see.”

After compiling the list of figures for students to choose from, Lamberton said there was some hesitation from the students as many names were new to them.

After beginning the monthlong project with an intention to focus one day a week on research and assembling the museum, Lamberton said her students now typically spend a portion of their class periods three days a week working on it.

“The kids really enjoy doing it,” she said.

The goal is for Lamberton and her students to have the museum completed by the end of Black History Month, when they hope to share it with other students, parents and community members.

“Most of the names on the list, they didn’t know. I have Barack Obama, Kamala Harris and Muhammad Ali, but the majority of names they didn’t know,” Lamberton said. “A lot of times, I can see they are talking with the students next to them, and they’re learning. Watching videos of the person. It’s a really valuable asset to be sharing. You can see they’re actually talking about it.”

NILES — A unique challenge posed by COVID-19 in the classroom led to an opportunity for recent high school graduates... read more