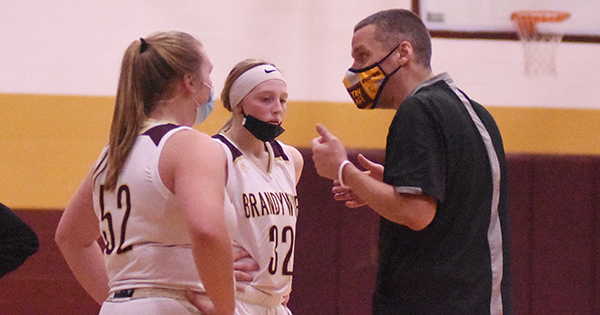 The victory improved the Bobcats to 2-1 overall and 1-1 in Red Division action. It was also veteran Brandywine Coach Josh Hood’s 250th career victory with the program.

“Win No. 250 in 12 years is special for our program and all those whose have been a part of it,” Hood said. “When you combine excellent players with supportive parents, the best assistants around, and an athletic director Vance Stratton, who has your back this is the end result. As a head coach, you think much more about the 27 losses and where you screwed up in preparing your team on those evenings rather then the wins.

“For me personally, 250 wins means I’m getting really old and I have a better half at home Willow, who has been awesome at raising our children during the winter months while supporting me and my passion of coaching at my alma mater.  To do this at Brandywine, which I consider to be the greatest school there is, makes the 250-27 record of our program even more special.”

The Bobcats struggled at the defensive end according to Hood against the Shamrocks, but an improved offense helped lead the way to victory.

“With limited practices leading up to playing in competition there’s a lot we still haven’t covered,” Hood said. “Right now, the biggest goal is to get better each day before March Madness.”

The Bobcats led 13-9 after one quarter and 31-15 by halftime. Brandywine increased its advantage to 58-23 heading into the final quarter.

Freshman Ellie Knapp scored a game-high 22 points to lead the Bobcats, who also got 14 points from Cortney Bates and 12 points from Alysa Adamczyk.