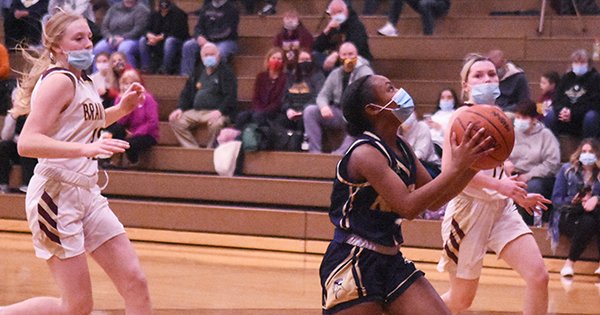 NILES — Despite losing one of its top players early in the second half, host Niles was able to hold on to beat visiting Paw Paw 47-36 in non-conference girls basketball Saturday afternoon.

The win came less than 24 hours after the Vikings had opened their season with a win over crosstown rival Brandywine.

Leading 22-16 at halftime, Niles loss junior guard Amara Palmer to what appeared to be an ankle injury. Palmer did not return to the game. Vikings’ Head Coach Jessica Johnson said she did not know the extent of the injury, but felt that Palmer would not play in Thursday’s game against Berrien Springs.

The Red Wolves were able to take advantage of Palmer’s injury, as they outscored Niles 14-7 in the third quarter to take a 30-29 lead into the fourth quarter.

“It did not take long to see the effects of playing back-to-back games,” Johnson said. “Many of our shots fell short, but the girls picked it up defensively to make the difference.”

The Vikings regrouped between quarters. Johnson challenged her players to step up in Palmer’s absence. Senior Alexis Rauch was one of those who did and helped lead Niles to the victory.

The Vikings (2-0) head to Berrien Springs for a 5:45 p.m. BCS Athletic Association Red Division contest against the Shamrocks.