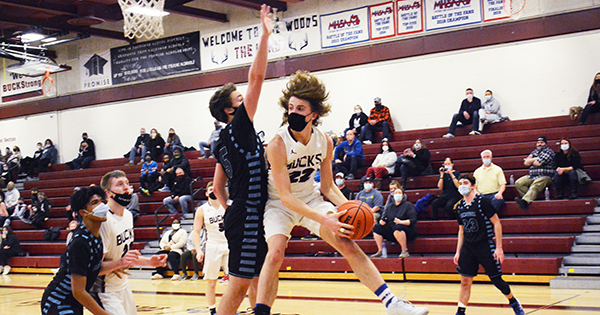 The girls game was over shortly after it began. After taking an 11-3 lead into the second quarter, Buchanan used a 22-7 advantage in the frame to go into halftime up 33-10. The Bucks turned up the defensive intensity in the second half, outscoring the Colts 27-3.

Sophomore Faith Carson led all scorers with 22 points and Hannah Herman scored 10, including a jumper to beat the buzzer for the game’s final points.

“We’re still kind of a young team,” said Buchanan coach Gabe Miller. “I only have one senior that plays but we have pretty much everybody back from last year, so that’s going to pay off during this short and kind of crazy year. We haven’t had a lot of time to get in the gym and get back to the stuff that we run, so that has benefited us.”

Once again, Faith Carson proved to be a two-way force to be reckoned with. Jonatzke and Herman turned in strong performances, according to Miller.

“Faith is a handful for everybody, whether it’s us feeding her or creating her own opportunities off offensive rebounds,” Miller said. “I thought Hailey handled the pressure. We’ve got another, you know, guard that’s been sick for the last week and so she’s paying all by herself and I thought she did a good job getting us set up in the right plays and I thought McKean and Herman and Lietz did a good job at the point of our process far as creating opportunities for other players. I was pleased with our effort.

Buchanan (2-0, 1-0) will prepare to host rival Brandywine at 7 p.m. Friday. Miller hopes to have guard Alea Fisher, who has yet to play due to injury, back in time for the game.

“It’s always a good game,” Miller said. “They are a very well-coached team and a great program. [Josh Hood] has some good players and we’re excited. It will be a nice measuring stick to see where we’re at.”

On the boy’s side, the Bucks scored the game’s first 13 points of the game before Comstock trimmed its deficit to 22-16 in the second quarter. Entering the second half up 24-16, a John Gartland 3-pointer followed by a Logan Carson putback dunk kickstarted a 12-0 Bucks run that they never looked back from. Buchanan used its size advantage to grab offensive rebounds and its press defense led to Comstock turnovers, which resulted in easy baskets for the Bucks.

A Logan Carson fastbreak slam pushed Buchanan’s advantage to 46-20 in the third quarter.

The Bucks led by as many as 33 points in the game. Logan Carson and Ryan Young led all scorers with 14 points apiece while John Gartland and Macoy West scored 11 and nine points.

“The press was probably what people noticed,” Buchanan coach Reid McBeth said. “But I thought our rebounding was outstanding. It’s probably gonna be tough for most teams to rebound with us. Obviously with Logan, but then we have Gavin and we just have a lot of kids that go after rebounds hard, so that’s promising. I’m just happy that we’ve got the win and that the kids are playing as hard as they can.”

With a conference win in tow, the Bucks host Bridgman at 7:30 p.m. Tuesday and face Brandywine at 7:30 p.m. Friday at Brandywine. Buchanan hopes to have leading scorer Young back for the game after Young left Friday’s game in the fourth quarter with an ankle injury.

“Hopefully, just a sprained ankle, and we can get him back here,” McBeth said. “It’s a shortened season so anything like this is gonna kind of put a damper on things a little bit, but we’re hoping for the best and we’ll see what happens. We have guys who will be ready to play, regardless.”

DOWAGIAC — A Dowagiac teen was injured in a Sunday night accident, according to the Cass County Sheriff’s Office. Sheriff... read more