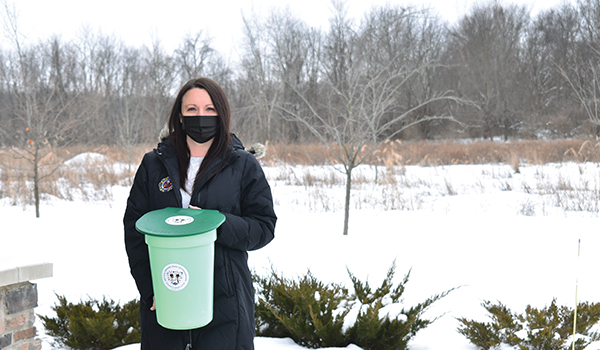 Nicole Holloway, cultural activities coordinator for the Pokagon Band of Potawatomi Indians, poses for a photo. She will lead a virtual Sugar Bush season this year. (Leader photo/SARAH CULTON)

DOWAGIAC — One annual tradition will be going virtual, thanks to COVID-19.

This year, the Pokagon Band of Potawatomi Indians will be hosting a virtual Sugar Bush season to allow Pokagon citizens and community members alike to follow along with videos surrounding the traditional Pokagon maple syrup and sugar harvesting and production process.

Traditionally, the Sugar Bush season is a large affair, complete with many volunteers, visits with school children, and educational experiences open to the community about the Pokagon methods of maple sugar and syrup harvesting, as well as lessons on Pokagon values of food sovereignty and nature preservation. Eventually, the program culminates with a morning feast for Pokagon citizens and the greater community to participate in and taste the finished maple syrup and maple sugar from the season.

Due to the ongoing COVID-19 pandemic, things will look different from years past.

“This year, we can’t accept volunteers,” said Nicole Holloway, cultural activities coordinator for the Pokagon Band of Potawatomi Indians. “For the safety of our citizens and our local volunteers, we’ve decided to keep things small and instead do things virtually.”

Throughout the season, Holloway will record and post videos to the Pokagon Band’s website to showcase each step of the harvesting process. Along the way, Holloway will be offering “how-to” tips to allow residents to follow along and harvest their own sap and produce maple syrup and sugar at home.

The first video is expected to be put up before the end of the month, as the weather allows for tree tapping. Holloway said residents could begin to look out for the first video around Feb. 19.

“I’m going to be recording every step of the process on video,” Holloway said. “I want people who are trying this at home for the first time this year to be able to see if there is anything they missed. We will start with the tapping, then the boiling, then bottling and processing, and at the end, I’ll probably even record some recipes you can use to cook with the syrup and the sugar.”

In a typical year, the band would tap roughly 150 trees in order to produce as much maple syrup as possible. This year, as Holloway will be without any volunteers, she will only tap between 15 and 30 trees.

“This is going to be a demonstration season,” she said.

Despite the changes and challenges of this season, Holloway said it was still necessary to celebrate the Sugar Bush season and the traditional ways of making sugar and syrup.

“It’s important to make people realize that even though we are not meeting in public as a large group, we can still practice these things on our own,” she said. “Food sovereignty is so important, and I think the past year has really highlighted that. If you can learn to live off the land and make your own sugar, that’s a survival skill that’s more important now than ever.”

Holloway said she would encourage anyone to follow along with the Sugar Bush season videos, saying that harvesting maple sugar and syrup is a fulfilling task that requires minimal equipment. If anyone should have questions along the way, she said she would be happy to answer them at nicole.holloway@pokagonband-nsn.gov.

“You can’t mess this up,” she said with a laugh. “There’s nothing to be scared of, and it’s a lot of fun. Once you learn how to make your own, you will never go back to store-bought again.”

To follow along with the Pokagon Band’s virtual Sugar Bush season, visit Pokagonband-nsn.gov and search “sugarbush.” In addition to the videos, the band has made available a free, downloadable coloring book for children to learn about Potawatomi words related to the Sugar Bush season.