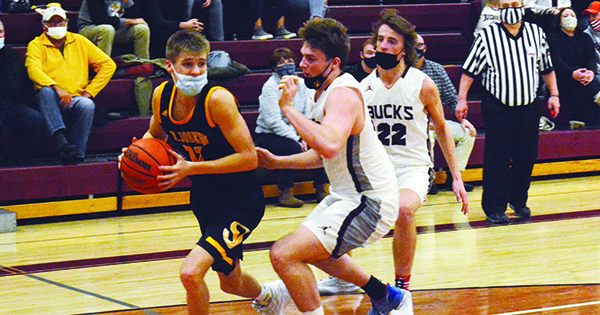 BUCHANAN — The Buchanan boys basketball team was aiming to christen the abridged season with a win, but visiting St. Joseph had other ideas.

The Bucks fell to the Bears in a physical 56-53 loss Tuesday night.

“Our kids played hard,” said Buchanan coach Reid McBeth. “You certainly can’t fault the effort. [St. Joseph] hit a few more shots. They have some good shooters and knocked some shots down. I was happy with our effort, and we just came up short. Our kids battled the whole time, and if we play that hard all the time, we’re gonna have a good season.”

With less than two minutes remaining in the game, Buchanan’s John Gartland made one of two free throws to tie the game at 51 all. But a John Brown putback gave the Bears a lead they would not relinquish and a pair of Brennan Kerns free throws would ice the game moments later.

Trailing 33-28 at halftime, the Bucks came out firing on both ends of the floor, with a Ryan Young 3-pointer capping an 11-0 run to start the half. But foul trouble kept key players like Gavin Fazi and Logan Carson in foul trouble in the second half, which bogged down the offense.

With Buchanan’s frontcourt in foul trouble, St. Joseph was able to find baskets in the paint. Brown scored 10 of his 14 points in the fourth quarter.

“Having Gavin with four fouls so early in the second half hurt,” McBeth said. “Macoy [West] hasn’t had a lot of varsity experience. He went in and played really hard, but you never replace a guy like Gavin. We battled and we’ll keep getting better.”

“I was happy,” McBeth said. “We kind of scheduled this game at the last second, so to be able to get a game in with Saint Joseph and have that caliber of basketball this early in the season was good for both of us.”

The 2021 season is different in many ways for teams statewide due to the ongoing COVID-19 pandemic. Playing a home game at reduced capacity and without the award-winning “The Herd” student section will take some getting used to for McBeth and his team, but they are thankful to play all the same.

“I think that maybe makes it all the more impressive,” McBeth said. “These kids are not playing because there’s a thousand people in the stands. They are playing because they love the game of basketball and when you get kids who go out there and go that hard, you have to be pleased. I was super happy being a coach tonight.”

Buchanan (0-1) aims to get in the win column when it hosts Comstock at 7:30 p.m. Friday. McBeth is navigating uncharted territory in guiding his team through a pandemic, but he is proud of the way his team has handled the adversity.

“It was tough, not just for Buchanan but for all the kids,” he said. “You never know what’s gonna happen, and most of our kids had the same thing happen in the fall. You never know what day they’re gonna show up to take your season away, so you tell them you come to work every day and that Friday night’s payday, but we didn’t have any paydays for a long time. They’ve been waiting and waiting.”

“We’re excited,” McBeth continued. There are some guys who’ve just been busting their tails since they were sophomores waiting for this night and this opportunity to play out there as seniors and so to finally have that opportunity for these guys, I was happy for that.”