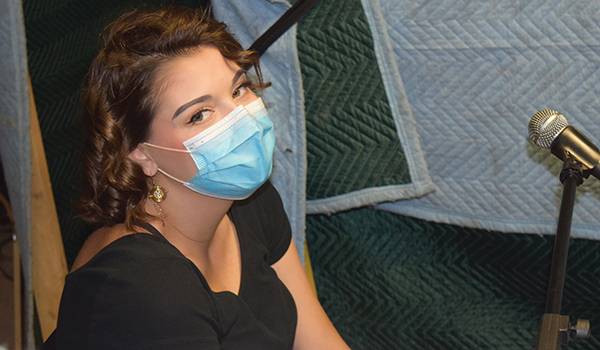 SMC student Kiana Blake rehearses for her role in the theater’s production “Terror on Dewey Lake.” The radio show production aired in October 2020 and is available on SMC’s website as well as its YouTube account. (Submitted)

Rotarian and SMC Vice President Susan Coulston introduced guest speaker Marcus Roll to the group. Roll spent his first years with SMC as an admissions advisor before becoming the college’s director of theater operations three years ago.
“He was going out to high schools and recruiting high school seniors to come to SMC, working with their parents and whatnot,” Coulston said. “Then he moved over into this role of a director of our theater operations, so he runs the activities that go on in the Lyons Theater.”
Recent theater productions include “The Secret Garden,” “Chicago” and “Children of Eden.” According to Roll, the program was ready to debut its spring 2020 show “Grease” before the show was canceled due to the COVID-19 pandemic.
Not wanting the fall season to meet the same fate, Roll teamed up with SMC assistant director of campus life Branden Pompey with an idea for a radio show centering around the Dewey Lake Monster titled “Terror on Dewey Lake.”
The Dewey Lake Monster is a legendary Sasquatch-like creature first reported in the mid-1960s after sightings near Dewey Lake in Dowagiac. The show, which released in October 2020, centered around a group of students unraveling the mystery of the disappearance of a local town hero, with the Dewey Lake monster as the prime suspect.
“We wanted to have it be sort of like a ‘Twilight Zone’ meets ‘Scooby Doo’ kind of thing,” Roll said. “Something that was based around the local legends of the Dewey Lake Monster was fitting. I did not grow up in southwest Michigan so I had not heard of this before, but I was a big Sasquatch enthusiast growing up, so I was on board right away from the beginning.
The radio show format allowed Marcus and Branden to keep both performers and spectators safe from the large casts and crowds that typically accompany theater productions. Recordings and rehearsals were able to be done via Zoom.
“It was perfect for the times,” Roll said. “Sometimes when rehearsing in person, you don’t have the close connections with people when you’re doing a play and have to sit right next to each other and things like that. It was something we could do completely in-house at a fraction of the cost of what a normal play or a variety show or something that takes produce.”
Roll said it was a great educational experience for the students to be able to learn some technological aspects of production. “If someone who’s interested in technical theater, they may not get a chance to really do a creative process as much as they’re told what to do,” he said. “We were able to make our own sound effects and do things with our audio engineering that we don’t typically get an opportunity to do so the students that are interested in audio engineering and producing there’s a great opportunity for them.”

“Rehearsing it only requires nine actors to be on stage,” Roll said. “There’s no ensemble, so we can stay in small numbers, and you know, rehearse things in small groups to make sure that we’re staying within COVID recommendations and guidelines.”

According to Roll, the musical will be performed on stage at Lyons Theater, recorded from multiple angles, edited in studio and released online for viewers to stream.

“We’re offering some new licensing options where you can stream these shows,” he said. “My goal is to have three camera angles going at once and we’ll record the audio in. I will edit together all those cameras and choose the angles that I want for that scene or for that song and we will make it into one long movie. It will then get uploaded to a website that Musical Theater International is hosting and from people’s living rooms, they’ll be able to go by tickets and watch their production from home.”

While this past year has been different from the norm, Roll is happy with the way students and staff has adapted to the current situation.
“Our performers are in costume playing with an orchestra,” Roll said. ‘They’re dancing. They’re doing all the things that they would be doing but within the guidelines of what we should be considering with COVID right now. We don’t have a live audience. It is a small, tight-knit cast and the great thing is that when the numbers are small, a person’s sense of personal responsibility goes up, so the learning process is gonna be great. We’re on a tight schedule, but it should be good. There are a lot of changes this year, but a lot of good changes, too.”

BUCHANAN – A Buchanan High School junior will have two pieces of her work exhibited at the annual 2021 Scholastic... read more