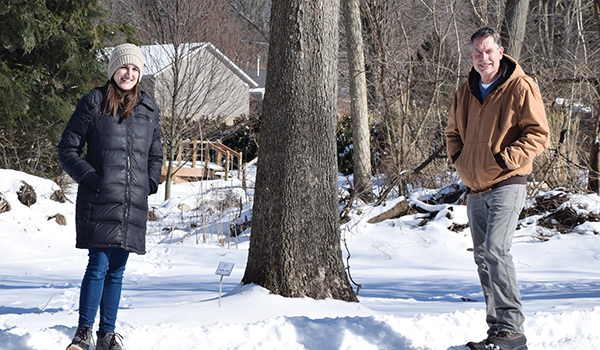 NILES – A piece of history from the Apollo 14 mission still grows at Fernwood Botanical Gardens.

Today, the sycamore stands out.  Once known as a “moon tree” sapling, the tree is soon celebrating 50 years on earth following its space mission.

From Jan. 31 to Feb. 9, 1971, the sycamore’s seed traveled with NASA astronaut Stuart Roosa. The saplings were planted to celebrate the U.S. Bicentennial in 1976.

Roosa, an American aeronautical engineer, test pilot, U.S. Air Force pilot and smokejumper, or wildland firefighter who parachuted in to fight wildfires, brought a variety of tree seeds with him to space. The project was to witness any differences between seeds traveling through space with those on Earth, between NASA and the U.S. Forest Service.

“There were about 100 of these saplings after the mission,” said Steve Bornell, manager of facilities and grounds at Fernwood Gardens. “The seeds were used for comparison. They traveled with the mission and were brought back and compared with seeds of the same trees germinating here at an earth station.”

According to Bornell, four of the saplings went to chosen gardens and parks in Michigan. The sycamore standing tall in Fernwood Gardens is the only remaining “moon tree” in Michigan.

“The plan was to put it in our arboretum,” said Elaine Rowland, director of development and external relations at Fernwood Gardens.

The tree never made it to the arboretum area of the gardens, but instead took to its original location behind the Japanese Garden.

“It has a good spot where moisture collects,” he said, which is ideal for sycamore trees.

The seeds were germinated in a facility in Mississippi, according to Bornell. They were sent off after being observed.

“Michigan has some rough winters, so that’s maybe why some of the others didn’t make it,” Bornell said.

Rowland said Fernwood Botanical Gardens is honored to be a piece of the history behind the tree.

“This is a really interesting study they did, and to think that Fernwood was chosen for that,” Rowland said. “Fifty years later, we can still appreciate that and see it.”

Rowland recommended for those hoping to visit the “moon tree” at Fernwood Botanical Gardens, at 13988 Range Line Road, Nils, to stop into the Education Center onsite. Staff and volunteers will be able to guide visitors to the tree and tell them about its location.

SOUTHWEST MICHIGAN — As of Wednesday, Berrien County reported 10,183 COVID-19 cases and 206 deaths, according to the Michigan Department... read more