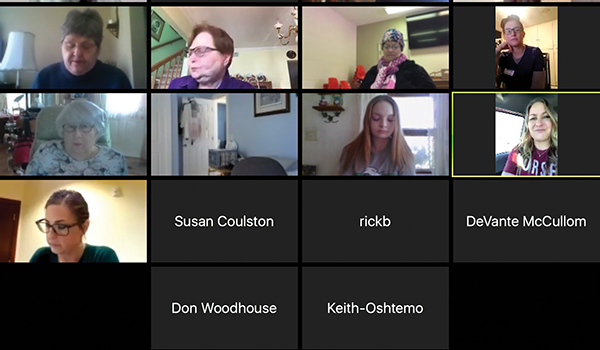 DOWAGIAC — The arrival of COVID-19 vaccines has ushered in a wave of hope throughout the world, but questions still remain.

Natalie Ryder, chief administrative officer at Ascension Borgess-Lee Hospital in Dowagiac, joined the Dowagiac Rotary Club as its special guest to talk about the vaccine and how the hospital is handling it.

According to Ryder, Ascension Borgess-Lee received 300 doses of Moderna vaccines as well as 300 second doses. The Moderna COVID-19 vaccine is a messenger ribonucleic acid vaccine that is administered as a two-dose series, 28 days apart, into the muscle.

The primary role of RNA in the body is to convert the information stored in DNA into proteins. Unlike most vaccines, which insert a weakened germ into bodies to trigger an immune response, mRNA vaccines teach cells how to make a protein that triggers an immune response inside bodies.

Ryder said the Moderna vaccines are “frozen” vaccines, meaning they are kept in storage at –20 degrees C to prevent the mRNA from being destroyed. Once thawed and reconstituted, the vaccine is only usable for six hours. Unlike Pfizer’s vaccines, which come in five-dose vials, Moderna vaccines come in 10-dose vials.

“Moderna vaccines are a little trickier logistically,” she said. “We need to get our arms in increments of 10 because we can’t store it. There are no preservatives, so once you pierce that vial, it’s only good for six hours.”

The hospital administered its first round of vaccinations as soon as it received them on Dec. 23, Ryder said. Distribution of the vaccine in Michigan is being conducted in a phased approach as it will be several months before enough of the vaccine has been received to vaccinate everyone. The prioritization guidance, established primarily by the CDC, has an emphasis on ensuring the continued functioning of the health care system and essential services in the community and protecting people at increased risk for severe COVID-19 illness.

Priority Phase 1A clinics consist of EMS, healthcare providers and frontline healthcare/drug care workers. Priority Phase 1B will focus on citizens age 75 and older, first responders such as fire and police departments, critical infrastructure and teachers.

“Since we’re a smaller hospital, we zipped through the first phase pretty quickly because there were a lot of people who were very eager to get it,” Ryder said.

After administering doses to its staff, the hospital had vaccines to spare, so it partnered with the Van Buren/Cass District Health Department to administer vaccines to Phase 1B clinics.

“Halfway through giving these vaccines, we discovered that there was an 11th dose in some of the vials,” Ryder said. “We received authorization from the CDC to use those so we’ve been able to administer about 315 doses to the community.”

Ryder said that Ascension Borgess-Lee’s Kalamazoo branch has begun administering 1B vaccines and that if community members do not want to wait until the Dowagiac branch gets it, they are fully authorized to receive the vaccination in Kalamazoo if they are 75 and older.

She also said the hospital started its round of second vaccine doses on Wednesday. The health department may transition the vaccine supply out of the hospitals and into the community to places such as local practices and pharmacies.

NILES – The Michigan Department of Health and Human Services, as well as the governor’s office, dealt another blow to... read more