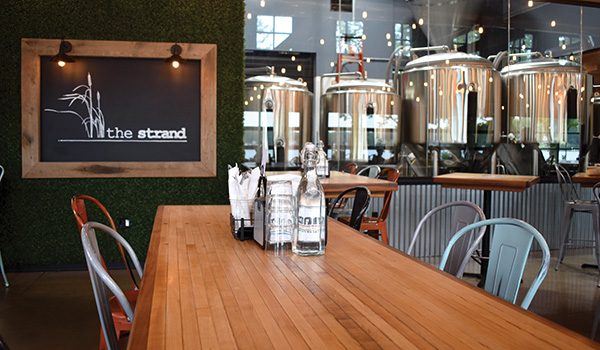 SOUTHWEST MICHIGAN – Last week, restaurant owners and residents were eager to enjoy a plated meal in a return to normal. Instead, they were told they would have to wait until at least Feb. 1 to do so. Gov. Gretchen Whitmer and the Michigan Department of Health and Human Services announced non-contact sports could resume and group fitness classes could return, but dine-in services continued to be pushed back as COVID-19 cases have stayed elevated throughout the state.

Area restaurant owners have faced uncertainty and long stretches of being unable to serve guests indoors, creating a financial strain on businesses.

At The Strand, 93415 County Road 690, Dowagiac, owner Matthew Weil is hoping for the Feb. 1 reopening. In the meantime, The Strand has its outdoor heaters going for Michiganders willing to keep their coats on to enjoy a brew outdoors.

“It really sucks, but I’m glad to see at least a date to reopen partial indoor dining,” Weil said of the hopes Feb. 1 is the day he has been waiting for. “Right now, considering snow coming, we are going to open with heated, outdoor covered spaces.”

Weil said the restaurant will also be offering curbside and ride-up services for those on snowmobiles. When allowed, Weil said The Strand will reopen with its full menu to indoor dining at a limited seating capacity.

In Niles, Create Bar and Grill, 1245 S. 11th St., has yet to debut its dine-in service to guests due to ongoing COVID-19 mandates. General Manager Nate Barnett was hoping to open the restaurants’ doors in early December. Since then, the restaurant has been active in its efforts in offering take-out.

“Being closed at all is a challenge, but the most frustrating is the short notice,” Barnett said.

He said it is difficult for the restaurant, but even more so for the suppliers restaurants order from. The extension of orders has been within a few days of the original order’s expiration, leaving food and supply orders hanging in the balance.

Barnett is eager to open Create’s doors, but said the restaurant will likely be “fashionably late” whenever dine-in ban is relaxed. He said this is due to needed training for waitstaff.

“I’ve hired everybody, but they’ve been hired since the first part of November,” Barnett said. “They had to find income to survive. I won’t be able to do training until we have a definitive opening date. We will probably lag a week unless an earlier notification comes into play.”

Barnett has been grateful for the community support he said the restaurant has received.

“There’s a lot of comradery in regards to small businesses working together, communicating together,” he said.

Another Niles business, Pizza Transit, 215 E. Main St. is missing its guests dining in with them.

“I think most of us understand we need to keep people safe, but we also have families to feed, bills to pay and staff that count on being able to work with many relying on making tips,” said Pizza Transit owner Sarah Brittin.

Brittin said Pizza Transit does a “substantial amount” of business for carryout and delivery, with its customers being very supportive, but she misses the energy of people in the restaurant.

“Coming into an empty dining room for months is disheartening,” Brittin said. “Being so close to the [Indiana] state line makes it extra hard for Niles businesses because you can drive a few minutes and dine in, have some drinks and enjoy a movie. It makes it hard to compete.”
Brittin hopes to reopen the dining room on Feb. 1, and said she is thankful for both her staff and community’s support navigating the shifting mandates.

A few miles down the road, Union Coffee House and Café, 115 E. Front St., Buchanan, owner Molly Thornton has worked hard to adapt her business at every turn, sometimes running the café on her own.

She is hopeful to have guests dining in on Feb. 1.

“I personally have been on the side of doing our part to ‘flatten the curve,’ but I have reached my max when it comes to my work life,” Thornton said. “It’s time to let our small businesses be open.”

She said there has been about a 40-percent decrease in sales, presenting a challenge in keeping hours for staff members.

“Back in March, we were stunned by the original dine-in ban, just like everybody else,” Thornton said. “As a small business owner, I had to 100-percent reduce my staff hours for a short period of time. I closed for a couple days to take it all in and make a plan for survival.”

During the planning period, she built an online ordering system, edited down the menu and created a no-contact pick-up option.
Thornton said she worked by herself with limited hours through April, and in May was able to bring back another employee when they were allowed to reopen to allow customers to enter.

She received assistance from area agencies, and brought back additional employees and added back more hours to the schedule. Operating at 50-percent capacity through the summer and fall helped bolster the takeout business Thornton had established.

“In November, when the second dine-in ban came down, we were able to keep sales on the low end of average because we already had an established takeout base to lean on,” Thornton said. “I like to think that we have remained resilient and agile throughout the past year, and were able to quickly adapt to changes as they came.”

The short notice of mandates changing from Whitmer and MDHHS is something Thornton anticipates now.

“My staff has been great about adapting to the changes, and we have been mask-positive since last spring,” Thornton said. “In my opinion, this has made the changes easier to swallow, so to speak. When it comes to staff, I feel the greatest challenges has been finding and keeping hours for my existing staff.”

NILES — Dozens of families and visitors strolled through Niles Saturday morning to view ice sculptures that had taken over... read more