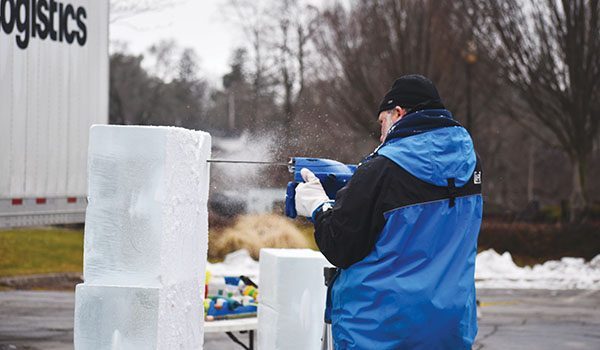 NILES – The 17th annual Hunter Ice Festival weekend was quieter than in years’ past — devoid of the sound of dueling chain saws in ice sculpting competitions and without as many ice sculptures in front of businesses downtown.

Despite its scaled back approach, Niles Main Street/Downtown Development Authority Director of Marketing and Administration Lisa Croteau believes it was successful.

“I’ve spoken to a lot of the downtown businesses, and it was not like a normal Hunter Ice Festival year, but it was busier than COVID-19 weekends have been,” Croteau said. “People were overwhelmingly pleased.”

During the event, interactive ice sculptures were featured, including an ice throne, ice ping pong table, ice corn hole boards, and even a makeshift ice slide near the veterans’ memorial at Riverfront Park. Throughout downtown, ice statues and scenes with multiple statues were displayed, encouraging people to walk around to see each one.

Families toured downtown, children played and small groups came together at points of interest like The NODE downtown to spend time near the fire and enjoy a drink downtown Saturday and Sunday.

Businesses had some of their own events coinciding with the festival. The Grand LV hosted its first Small Shops weekend of the year, where small businesses came together to offer a unique retail experience within the downtown event venue.

Wrapped in Light, LLC hosted its first Cold Yoga event at The NODE on Sunday, bringing in around a dozen people to practice yoga with instructor Meghan Engledow and learn Wim Hof breathing techniques with Luke Andresen.

“I think it was worth doing, and there are still people wandering around [Monday],” Croteau said. “I think the community enjoyed it.”

Despite the changes this year’s festival underwent, Croteau said she believed this year’s Hunter Ice Festival was a successful one.

“The [ice sculptures] were really great. They did some carving in the parking lot on Saturday and stayed in their own little ‘pod’ while people watched from a distance,” Croteau said. “I think everybody did good for what we had to work with. I believe it was a successful, non-festival weekend.”

SOUTHWEST MICHIGAN — Cass County reported new COVID-19 deaths over the weekend, according to the Michigan Department of Health and... read more