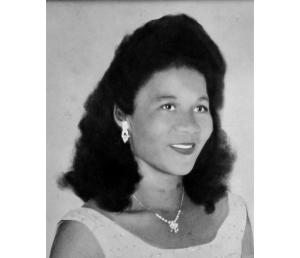 Ina Roana Monroe was born on April 12, 1930, in Pell River, Jamaica, West Indies, to William Lee and Almena Gordon. She grew up enjoying life on one of the most beautiful islands in the world.

As a young woman, she was trained and worked as a seamstress. She could sew some of the most beautiful clothes, pillows, curtains and whatever she desired. Her meticulous talent was obvious and stayed with her for life. If you were ever around in the house, you could hear the sewing machine working away into the night.

In 1968, Ina immigrated to Chicago, Illinois, where she met and married her husband, Herbert Monroe. They later moved and settled in Cassopolis, Michigan. She was a resident of Cassopolis for 40 years where she took care of her husband until his passing in 2009.

Ina had a certain strength about her. She made hard work, sacrifice, and steadfastness look easy. She was determined to ensure her legacy by making sure her children were afforded every opportunity to succeed and take advantage of what life has to offer. Ina was there to support them every step along the way. She had a fierce love for her children, so much so that they knew wherever she was felt like home and wherever she was they would be protected and taken care of. No ask was ever too big.

Ina took great pride in her family and wanted nothing more than to spend holidays and time with family and good friends. This was obvious to those who came around during holidays or just to visit. She was an amazing cook and baker. There was always food waiting for you and never a time when she would turn anyone away. Everyone still talks about her BBQ, fried chicken, cheesecake, chocolate chip cookies, apple pie and, of course, Jamaican food. A lot of what was prepared came from her and Herb’s farm. Ina took time to can, freeze and prepare all types of jams, jellies, fruits, pickles and greens. Some of that would follow her kids back to college or be mailed in a care package where many of their friends still reminisce about it.

In her last years, Ina continued to care for her children and grandchildren at any opportunity she could. She was able to spend some of that time in Farmington Hills, Michigan, and the remainder enjoying the sun of Santa Clarita Valley, California, and Gilbert, Arizona.

Ina Roana Monroe left our earthly world peacefully in the comfort of her daughter and son-in-law’s home, surrounded by family, on Jan. 5, 2021, in Gilbert, Arizona. She will rejoice in meeting her husband, Herbert Monroe, daughter, Jeanette Grant, mother, Almena Gordon, sister, Hannah Fletcher, brother, Ken Martin, step-son, John Monroe, and step-grandson, Kevin Anderson, and many more in the Kingdom of our Lord.

Mom — we love you and thank you for being our everything. May the light of the Lord shine upon you.

Family and friends will gather from 4 until 7 p.m. on Friday, Jan. 22, 2021, in Connelly Chapel Wagner Family Funerals, 202 N. Broadway St., Cassopolis. The Funeral Service will be celebrated Saturday, January 23, 2021 at 11:00 a.m. in the funeral home with calling one hour prior beginning at 10 a.m. Ina will be laid to rest in Prospect Hill Cemetery in Cassopolis.

Mary Charlotte Bonine Roberts, 86, died on Jan. 15 in Valdosta, Georgia from complications of COVID-19.  She was the daughter... read more