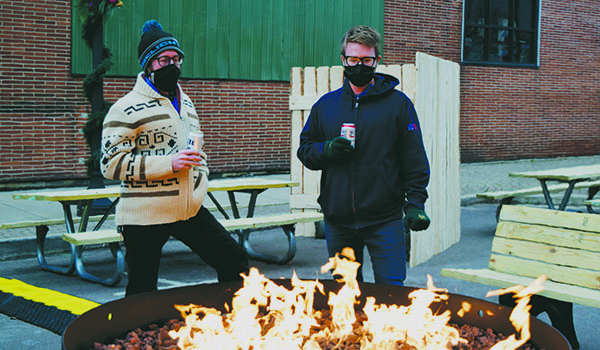 Charles Nelson, of Niles, and Ryan Cheevers, of St. Joseph, drink a beer near the firepit on Second street in the new Niles outdoor dining district. Both Cheevers and Nelson hopes it draws people to the downtown businesses. (Leader photo/CHRISTINA CLARK)

NILES — The flame at the firepit in downtown Niles will continue burning through April 12.

The downtown Niles Outdoor Dining Experience, or The NODE, on Second Street in downtown Niles was unanimously extended to April 12 by city council on Monday evening.

However, voices of concern came through as some community and council members questioned the safety of the installation.

At the top of the city council meeting, Brandon Townsley, owner of Niles Brewing Company, voiced his support for The NODE’s extension.

“We opened on Dec. 12, and The NODE has been a tremendous help in getting our name out there, and it’s a point across the street from the brewery to let them know they can get carry out to enjoy along with their favorite food,” Townsley said. “It has been growing every week, and this past weekend we even had a couple people coming up from Indiana to visit The NODE.”

Townsley said he considered having Hoosiers visit The Node a “huge win,” as many businesses are seeing their customer base going to Indiana, where pandemic restrictions are lighter.

Harry Thibault, another Niles resident, who owns 211 N. Second Street downtown, said he was a fan of the idea of The NODE, but had many concerns about its current form.

“The difficulty I have is with the configuration right now,” Thibault said. “I have real safety concerns about that.”

Thibault said someone had hit the corner of his building in the alleyway since The NODE had arrived, and he had concerns about the temporary gas line set up to run the fire pit.

Thibault said the gas line was not Americans with Disabilities Act compliant, being that it blocks access on the sidewalk to those in wheelchairs.

“Mostly, I’m a little nervous about having people get together in public around a fire downtown right now,” Thibault said. “I’m a homecare physical therapist, and I see up front what is really out there. I think a lot of people forget we are in the height of a pandemic right now.”

Members of the Niles Main Street/Downtown Development Authority said there was enough support among Niles citizens to form a group to maintain The NODE and clear snow.

Bertschy said she had heard concerns about the safety of the area from patrons of the Trap house 24 SLR trying to utilize the 24-hour nature of the facility. Mayor Nick Shelton said the wooden windbreaks could be moved for safety purposes.

Council members John DiCostanzo and Amanda Dunnem expressed concerns about the length of The NODE’s extension.

The date had been chosen by City Administrator Ric Huff, according to Shelton, as a time in which most epidemic restrictions for restaurants would likely be in place, as well as the date for the council’s meeting to discuss extending or ending The NODE at that time.

Shelton read results from a survey Niles DDA Director of Marketing and Administration Lisa Croteau had put out to 29 downtown businesses about The NODE.

According to the survey Shelton read, 26 business owners said [The NODE] was a “good idea,” two said it was “not a good idea,” and one did not have an opinion. On whether the business owners liked the location, 20 said yes, and eight said no. Businesses that said they benefitted from The NODE were 11 in agreement, 12 saying “no,” and six were not sure. The last question read off by Shelton was whether businesses had done something to benefit from The NODE, where seven answered yes and 22 answered no.

Council members DiCostanzo and Georgia Boggs both voted “yes” on the extension, after initially expressing concerns. DiCostanzo said he voted “yes” after understanding why the extension was in April, and Boggs said she would vote “yes” if the city would continue to address public safety concerns at The NODE.

The 17th annual Hunter Ice Festival was also passed unanimously, as a scaled down event as ice had arrived earlier in the day on Monday.

The Hunter Ice Festival was approved after The NODE at the council meeting, with council member Gretchen Bertschy praising the Niles DDA and Croteau for organizing the scaled down event with the ice sculptures.

NILES – A padlocked chain and caution tape showed up at Galaxy Roller Rink in Niles over the weekend. The... read more