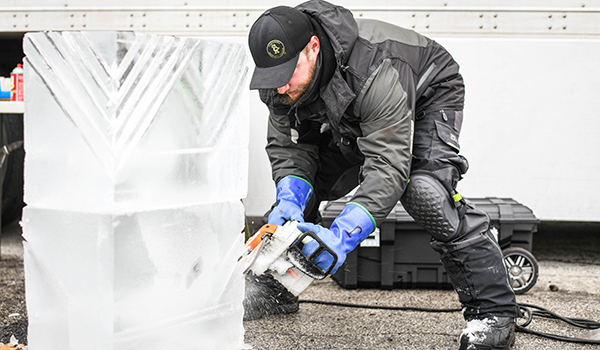 Pictured is Josh Niven in 2019 as he starts carving his sculpture to get ready for the Hunter Ice Festival. This year, the celebration of ice will be without fanfare due to the COVID-19 pandemic. (Leader photo/EMILY SOBECKI)

NILES — An annual downtown Niles tradition has been put on ice this year.

The Hunter Ice Festival will join the list of canceled and altered events due to the COVID-19 pandemic. The festival, along with its Fire and Ice carving shows, chili walk and packed lines for Hunter Festival ice cream will not be appearing in town.

Despite the changes, residents can count on one thing this year: there will be ice.

On Tuesday, the Hunter Ice Festival Facebook page updated its status to ask for donations for ice this year.

“A local foundation has graciously committed to match all donations received form this community ask, up to $5,000,” the status read.

The donations were collected through UncoverNiles.com, the official website of downtown Niles, run by the Niles Main Street Downtown Development Authority.

Lisa Croteau, director of marketing and administration with the Niles Main Street DDA, said the Hunter Ice Festival is important to both the businesses and residents of Niles.

In lieu of the festival, eight to 10 blocks of ice will appear in downtown Niles, with carvers being brought in to make them into some of the sights people look forward to each year.

“We are hoping they will be interactive, like the ping pong table and the throne,” Croteau said. “Things that people can stay socially distanced but also able to enjoy.”

Croteau said the event is usually a huge one for the city, which brings in thousands of people to the downtown area.

“Last year was probably one of the smaller ones because it rained all day on Saturday,” Croteau said. “We still had upwards of 10,000 people in town. In good years, when the weather is not too cold and not too warm, we have had up wards of 20,000 people in town for the festival.”

In addition to the Fire and Ice event, an evening ice carving event with light effects and music, there are carving shows at the amphitheater at Riverfront Park throughout the weekend.

“We are not able to do any of that this year because all of that brings a crowd,” Croteau said.

As she mentioned the businesses, which are not expected to serve an influx of visitors to the city as they are used to, Croteau asked people to keep their downtown businesses in mind, including the antique shops and clothing retailers.

“I hope we can pull it off so people remember for next year,” Croteau said of the ice carvings. “We’ll just have a really big festival next year.”

CASSOPOLIS — The first meeting of 2021 for the Cass County Board of Commissioners was a productive one. In addition... read more