DOWAGIAC — A Dowagiac man is in custody after firing shots into a vehicle Wednesday, according to the Dowagiac Police Department.

At approximately 5:15 a.m. Wednesday, officers of the Dowagiac Police Department were dispatched to the Baymont Inn on Amerihost Drive in Dowagiac in reference to several shots being fired.

Officers arrived and located a vehicle with several bullet holes in the hood of the vehicle, and no one else around.  At first, officers were unable to locate the owner of the vehicle or glean much information from persons at the hotel. The damaged vehicle was impounded for further investigation. 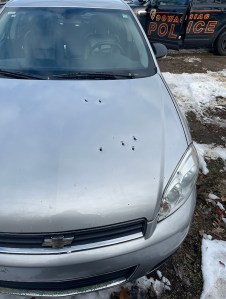 Officers later located the owner of the vehicle, a 25-year-old female from Dowagiac. Investigation showed that she and her boyfriend got into an argument and pulled into the Baymont Inn parking lot to continue arguing.

During the argument, the woman brandished a handgun she had been carrying. According to police, she did not make any threats with the handgun but instead advised that she was going to shoot the vehicle they had been driving so her boyfriend could no longer use the vehicle. The boyfriend then took the gun from her and fired several shots into the car.

Both left the area on foot. Officers recovered the handgun used during the incident and learned that the male subject is currently on parole for an armed robbery charge.

Dowagiac Police arrested the man, 26, of Dowagiac, on charges of felon in possession of a firearm, unlawful discharge of a firearm, and two counts of felony firearm. He was lodged at the Cass County Jail on these charges as well as a parole detainer for violating his parole.

The suspect’s name is being withheld pending his arraignment in Cass County District Court.  Dowagiac Police were assisted by the Cass County Drug Enforcement Team.

EAST LANSING — The Michigan High School Athletic Association has announced the sites and times for the upcoming 8-player and... read more