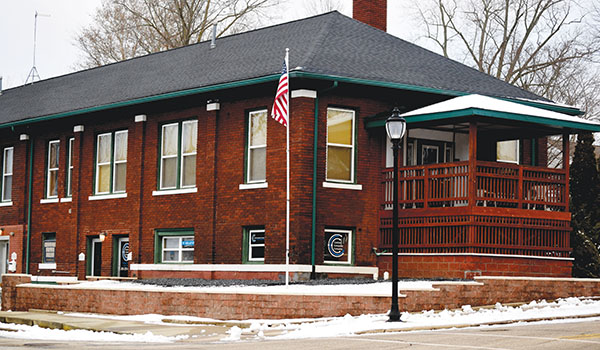 NILES – The brick building still known to longtime Niles residents as “The Bell Building” will be taking on another life in the next few weeks.

At the beginning of 2020, Michael Reed, owner of Custom Computer Company and operator of the Niles Impact Community Center, had moved the computer company into the building and opened Reed’s Rental Hall. With renovations done to create a large space to host weddings, celebrations and parties, the hall was quickly booked out for the year.

“Our parties could have 200 people, which is pretty big,” Reed said.

Despite what seemed like early success for the rental hall, the year 2020 had other plans.

With refunds given for every wedding and only a few parties hosted through the year in space after COVID-19 shut down events and gatherings throughout the year, Reed is closing the event space and moving his companies all under one roof.

The event space was 5,000 square feet and included a bar area. The bar area, which made up 1,500 square feet of the space, will be closed off for the time being, with intent to give it a new life as something else in the future.

The Niles Impact Community Center, currently located at 603 N. Second St. in Niles, will be moving to “The Bell Building.” This way, Reed said, each of his businesses will be under the same roof as Custom Computer Company, which resides in the lower level of the building. The existing business in the building, Creditors Service Bureau, remains the sole tenant outside of Reed’s own businesses.

“We don’t know when COVID is going to end, and we can’t have parties right now, anyways,” Reed said. “We are trying to be proactive and utilize the space to condense our two locations into one.”

The parties the rental hall did continue to host in 2020 posed challenges.  Attendees caused drywall damage to the building, Reed said. Without the ability to host large events, and event rules not being respected, Reed said it aided the decision to pivot away from the venue business for now.

“There were a few parties that signed contracts they were going to have parties anyway, as long as they followed our contract as maintaining the best social distance possible. Many took advantage and didn’t follow the rules,” he said. “We just need to paint and fix up from some of the parties. There was some drywall damage. The upstairs is good otherwise. We did add on the second entrance, which is what the Niles Impact Community Center will use. It wraps around the front of the building.”

To Reed, having the three spaces in the Bell building for him to put to use made sense.
The community center moving into the Bell building also may allow Reed to extend some of its operating hours so people can access the computers to do paperwork.
In the future, he hopes to add more computers stations, and eventually, add a spot for card and tabletop games like “Magic: The Gathering” and “Dungeons and Dragons.”

“We are going to stick with what we’re good at: computers and helping the community,” Reed said.

DOWAGIAC — A local performance group is raising money for an upcoming trip, one pair of shoes at a time.... read more