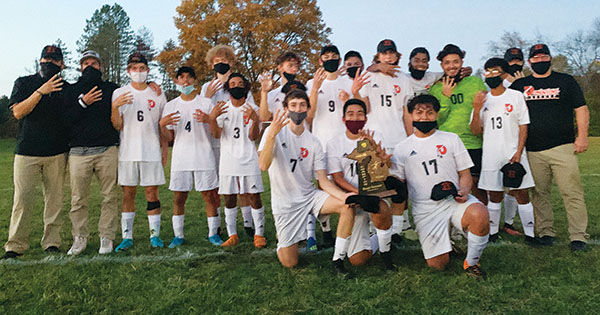 Editor’s note: Leader Publications has put together a list of the top 10 sports stories this year. Here are stories seven through five. Stories four through two will appear on Thursday, and the No. 1 story of the year will appear on Friday

DOWAGIAC — While high school teams, and their fans, were on pins and needles all year when it came to when, or even if, sports would be played, there were some highlights on the field and in the gym.

While COVID-19 dominated the headlines, success was found in the form of championships for at least two teams.

With 8:46 remaining in the second overtime, senior Gustavo Cruz became the first Dowagiac player to win four straight district championships as he beat South Haven’s keeper to give the Chieftains the 1-0 victory.

“We were playing nervous, playing scared, and not playing our game at all,” said veteran Dowagiac coach Mike Williams. “Like I said before, all we needed to do was to keep doing what we had been doing. Nope. Everything we could have done wrong at the beginning, we did it.”

The win advances Dowagiac to the Division 3 Regional semifinals hosted by defending state runner-up Grand Rapids South Christian. Dowagiac would defeat Hillsdale 3-0 in the semifinals, but would fall for the second consecutive year to the host Sailors 5-1. 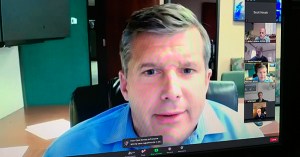 The on-again, off-again Michigan High School Athletic Association conclusion of the 2020 fall sports season is back on.

At least for now.

The MHSAA announced Dec. 26 that non-contact football practice, which was put on hold Dec. 22, just one day after restarting practice, could resume on Dec. 28. The state also said that the first round of the Michigan Department of Health and Human Services’ pilot testing program would begin on Monday.

“Schools will test players, coaches and other team personnel, with full-contact practice then allowed after a first round of negative results,” read the statement issued by the MHSAA. “The testing program will utilize BinaxNOW antigen tests that produce results within 15 minutes.”

Two days later, on Dec. 28, the MHSAA released the revised schedule for the completion of volleyball.

Teams are allowed to return to practice on Jan. 4 if they successfully pass the antigen tests.

The volleyball quarterfinals will resume on Jan. 12. According to the original schedule, Edwardsburg and Grand Rapids Christian are scheduled to compete at Three Rivers High School.

The semifinals, which will also be hosted at Kellogg Arena, are scheduled for Jan. 14-15. 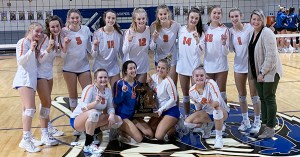 There was a time this fall that Edwardsburg senior Brooklyn Broadway thought her volleyball career was over.

She had just been involved in a car accident and suffered an injury to her wrist. What laid ahead was some healing and physical therapy.

Broadway endured the painful process and returned to the Edwardsburg lineup in time for the end of the regular season and the state tournament.

“I tried not to let it get into my head that we were going to win it,” Broadway said. “It still doesn’t feel real because we hadn’t won regionals since 1992. That has been our goal since the beginning of the season.”

For the fourth straight year, Edwardsburg was in the regional championship game. In the previous three years, the Eddies were thwarted in five sets.

Broadway and the Eddies were not to be denied this year as Edwardsburg swept from the Division 2 regional field, beating two-time defending champion Hamilton on Tuesday and topping host Battle Creek Harper Creek on Nov. 12.

Cass County commissioners look back on a successful year

CASS COUNTY — According to Cass County Board of Commissioners Chair Roseann Marchetti, in spite of the many challenges brought... read more