She was born on June 11, 1947, in Cassopolis, the daughter of James and Maud (Dohm) Tharp.  Trixie graduated in 1965 from Cassopolis High School, and then received her bachelor’s degree in education from Anderson University in Anderson, Indiana. 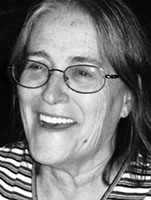 She came to Battle Creek in 1978 from Cassopolis. Trixie worked for H & R Block as a tax preparer for 12 years, then as a homemaker raising her children.

She was a member of a hot air balloon chase crew. Trixie enjoyed reading, sewing, doing puzzles, but especially enjoyed spending time with her family.

She was preceded in death by her parents; and a sister, JoAnne Tharp.

The family will receive friends from 11 a.m. to 1 p.m. on Saturday, Jan. 2, 2021, at the Richard A. Henry Funeral Home & Cremation Services.  A private memorial service will take place.  Memorial contributions may be made to the Alzheimer’s Association.  Condolences and memories may be left for the family at henryfuneralhome.org.

Heaven’s choir has gained a soft, sweet voice since Margaret Bell Kollar, 94, rested in the peaceful arms of her... read more