Ron was born on March 11, 1935, to Charles and Eleanor (Mills) Joanis in Bemidji, Minnesota. He honorably served in the U.S. Army. 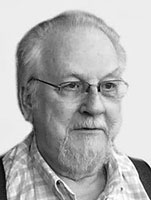 In his younger years, he enjoyed riding motorcycles, hunting and fishing. Most recently, Ron was an avid cook and would often create his own recipes. Most of all, he cherished time spent with his family.

A private family graveside ceremony with military honors will be held at a later date in Riverside Cemetery. Memorial contributions may be made to Cass County Animal Control, 323 M-62, Cassopolis, MI 49047. Arrangements have been entrusted to Clark Chapel, Dowagiac. Those wishing to send a condolence online may do so at clarkch.com.