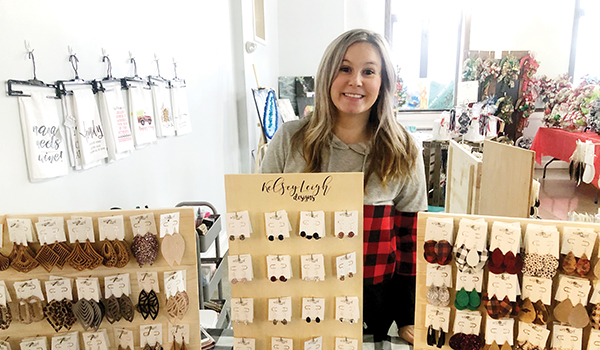 NILES — Melanie Kennedy knows what it is like to continually adapt her business by now.

As the owner of The Grand LV, at 104 N. Third St., Kennedy has weathered the rounds of shutdowns and mandates through COVID-19. During the current round of mandates in place, gatherings for events are not allowed, meaning The Grand LV’s holiday market originally planned for Small Business Saturday was canceled.

Now, Kennedy is hoping to use the downtown location of The Grand LV as a way to host small shops, to be mutually beneficial for the event venue and the other small businesses navigating changing rules.

“I think, right now, it’s really difficult to make things special,” Kennedy said. “Last year, when we first did the Small Business Saturday market we had more of an event with Santa Claus, cocktails and a photo booth.”
From 10 a.m. to 3 p.m. Saturday, Kennedy is hosting Small Shops at The Grand LV.

The event will host 25 vendors, including makers of handcrafted goods, jewelry, cosmetics, bath and body products.

“This is strictly retail shops,” Kennedy said. “We have really just had to find a creative way to adapt our business. ‘No gathering’ orders don’t seem to be lifted anytime soon, I’m sure through January and February. So, we decided to lease the space to small business and retails who wouldn’t necessarily be able to rent a storefront.”

“Because we are located in the downtown district, we can be a retail establishment,” Kennedy said.

The space, usually rented for slots of time for celebrations, events and weddings, will see retailers and makers renting for longer term space during the months when gatherings are not expected to be permitted.

“Individuals will be able to set up their own booths,” Kennedy said.

The idea to use the bridal suite and groom’s room as their own separate areas for larger shops has been considered by Kennedy as well.

“With Gabrizio’s in the building, we hope it can be mutually beneficial to draw traffic from one another,” Kennedy said.

As she continues to look for ways The Grand LV can adapt through COVID-19 precautions and mandates, Kennedy hopes to have the support of the neighbors and friends.

“I really hope the community can be supportive, and that everyone will feel safe,” Kennedy said. “We are going to put the same guidelines in place that everyone else does.”

Masks will be required for entry, as with other retail establishments.

Additionally, The Grand LV is collecting new, unwrapped toy donations for Toys for Tots. Saturday, Dec. 12, will be the last collection day for the donations.