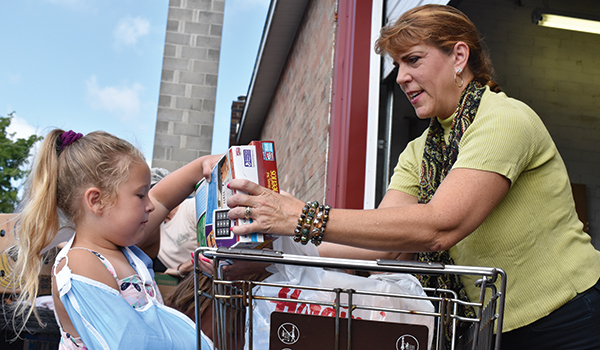 BUCHANAN — Four thousand pounds of food go out the door of Redbud Area Ministries in Buchanan each month.

The nonprofit, donation driven organization is a special place, Nowak-Walters thinks. Because Nowak-Walters does not take grants or “government money,” she does not have to work within the requirements and restrictions generally accompanying such distributions.

“This allows me to be the captain of the ship for RAM,” she said. “To make decisions for the guests we serve without needing to genuflect to requirements and restrictions. I want to do what makes the most sense, not what fits an agenda.”

In the most recent shifts in community needs being noticed in the Buchanan and Galien communities, both of which RAM serves, Nowak-Walters said they have seen people merging households.

“We are seeing broadened definitions as to what constitutes a ‘household,’ as people continue to find creative ways to be housed,” Nowak-Walters said. “It shifts what the house looks like. It might be a mom, dad, former neighbor, a niece and her boyfriend. We may be serving just as many people, but the household structure is different.”

Another thing Nowak-Walters has noticed is those formerly in the position to give, have had to shift to the receiving end.

“People who were formerly donors are now on the seeking side,” Nowak-Walters said. “It has hit them out of left field. They have never been in these shoes before.”

As the holidays approach, the need for food, clothing and holiday gifts is highlighted within the organization even more.

“This year has bit everyone. Nobody likes this year. Nothing is normal,” Nowak-Walters said. “As adults, we are forced to reason our way and rationalize through it. It’s different for kids. They don’t emotionally or cognitively have the skillset to move through this mess like adults do. I am doing everything I can do to make something look the same, to be familiar.”

For Christmas, one component of RAM’s plan is to distribute holiday meal boxes so everyone has access to making a traditional dinner for their family.

Another way Nowak-Walters said RAM seeks to help is by creating a Christmas market for parents and guardians to “shop” for their children. The catch is, the “shop” is all donated, and the items are free to the family.

The annual toy distribution at RAM is scheduled for Saturday. The organization takes registrations from community, and has parents/guardians “shop” the donations to pick out a gift for their child from birth to 18 years old.

As of Dec. 4, Nowak-Walters said 150 children were registered.

“[Parents] come to RAM, without their kids, because we want to give the dignity back to the adults,” Nowak-Walters said. “When they want to come, we normalize it. With the guidance of the shopper helpers, the RAM staff, we escort them through what we create as a toy store, stocking stuffers and more.”

The event is set up to be a shop without a cash register at the end.

“Just a ‘merry Christmas’ from RAM. A thanks for letting us bless you,” Nowak-Walters said. “We bag it up in a black bag for the parents, so the kids can’t see what is inside when they come home.”
As the need has evolved through 2020, Nowak-Walters has still seen the Buchanan community be very giving and supportive of the tradition.

Toys were still being collected at Gene Wesner Automotive for the drive, in its 40th year.

Nowak-Walters said in lieu of monetary gifts to his child, an older gentleman came down to RAM to give donations in his adult children’s names at the start of the holiday giving season.

“[The gentleman] summed it up: If everyone does a little bit, a lot can be accomplished,” Nowak-Walters said, recalling the encounter with the man. “I was so blessed to meet him. Here he was to help others. I was so blessed by the size of his heart. A giant heart in a small frame of a man.”

Niles police officers to continue Shop with a Cop tradition

Correction: An earlier publication of this article stated this event would take place on Saturday. The event will actually occur... read more