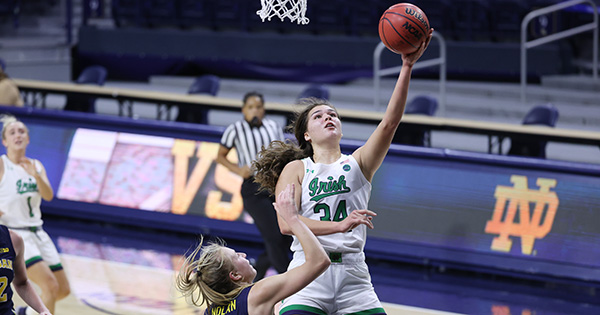 GREENSBORO, N.C.  — Notre Dame’s Maddy Westbeld has been named by the Atlantic Coast Conference as its Rookie of the Week, marking the first conference accolade for Westbeld.

The 6-3 forward earned 18 points and seven boards against the Wolverines before powering the Irish to victory over the Jaguars with 22 points, six boards and four assists. In fact, Westbeld scored 12 of the team’s 20 points in the fourth quarter.

Westbeld currently leads all ACC freshmen in not only scoring with her 17.5 points per game, but also the Points+Assists+Rebounds/Game category at 27.3. Furthermore, Westbeld is one of just three freshmen in the country, averaging over 15.0 points, 6.0 rebounds and 3.0 assists.

Westbeld and the rest of the Fighting Irish kick off ACC play at home at 2 p.m. Sunday, against Georgia Tech, on ACCNX.

NILES — Just when it looked like COVID-19 would not play a key factor in the Big Ten Championship game,... read more