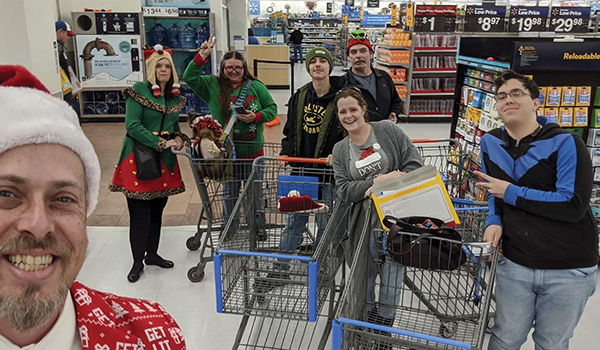 Pictured is a previous year's event.

NILES — Bruce Reith, of Niles, takes a lot of inspiration from a familiar, childhood figure.

“It really started with Mr. Rogers,” Reith said. “He said when bad things are going on, his mom always told him to look for the helpers.”

The inspiration is part of what prompted him and many of his friends to organize efforts to relieve strain on people throughout the Michiana community.

This holiday season, he and his friends are fundraising to help 10 families in the area have an easier time this Christmas.

Reith has organized a GoFundMe called “Shopping for Others 2020,” with a goal set at raising $3,500. The money will go toward the 10 families in need in the northern Indiana and southern Michigan area known as Michiana, Reith said.

“We didn’t always have a lot growing up,” he said. “The whole concept of Santa Claus puts out there that Santa Claus brings good boys and girls stuff. If your family doesn’t have anything, then it somehow means you’re bad.”

To help remedy the situation as much as Reith and “the helpers” can, they try to ensure each child on the list receives a couple of toys, an article of clothing and an educational gift. The educational gift can be art related or a book, Reith said.

Reith said he and his “helpers” have been doing this 12 years.

“We officially started it in 2008,” Reith said. “We had kind of been doing it before, but we really started organizing it and drawing money in then.”

“It’s not a religious or political organization,” Reith said. “These people are helpers. There’s Democrats, Republicans and Libertarians. Christians, atheists, and I, myself, am Jewish.”

The focus is on giving a little more joy, and creating a little less worry for people around him.

“It’s about the children,” Reith said. “We try to pick families with children in [the Santa Claus] age bracket. We want to take some stress off the parents. It’s already hard enough around the holidays, living paycheck to paycheck. It can make it make the whole situation unpleasant.”

In years past, Reith and his “helpers” have taken the funding raised and gotten together for a trip to the Walmart Supercenter on S. 11th Street in Niles.

“Last year, we all went shopping at the Walmart in Niles, and they opened up a [check out] lane for us,” Reith said. “That was really nice of them.”

Normally, after the shopping trip, the group would return to a warehouse Reith owns to sort the gifts and wrap them for the families. It would be a celebration, with pizza and laughter.

This year, Reith anticipates multiple, smaller trips and organizing the gifts to be dropped off outside the residences of those on the receiving end.

The chosen families sometimes have needs that transcend the holiday’s gifting spirit, and sometimes the money donated might go to a larger need – such as a utility payment, in addition to the gifts for the children.

“Each family member gets something,” Reith said, emphasizing that adults do enjoy receiving a gift as well.

If the money raised by the group goes above and beyond the needs they are looking to fill for the year, Reith said sometimes the group takes on extra families. Members also purchase and donate high quality socks for the residents at the Robert L. Miller Sr. Veterans Center on the Center for the Homeless campus in South Bend.

“They house 20 or so veterans, and they have a good rate of putting veterans into housing,” Reith said. “We like to give to them.”
Reith said that sometimes, even the families they have helped in the past have become helpers for future families in need.

The group also put together cold weather packets to place around town where those in need may find them. The bags include small items to help keep people warm, like socks.

“It’s a group of us just want to create a little less suffering in the world,” he said.
On Facebook, the group is organized in an event called “Shopping For Others 2020.” Members are collecting donations on a GoFundMe page by the same name, with Bruce Reith as its organizer.