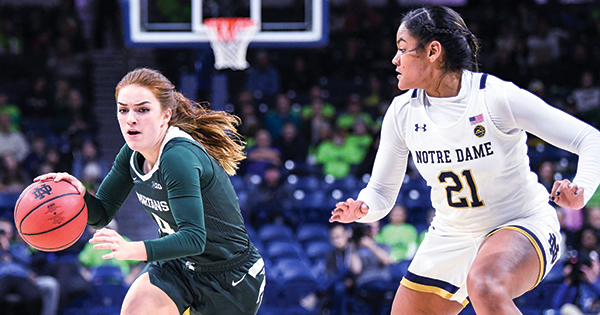 NOTRE DAME, Ind.  — Notre Dame women’s basketball (1-2) battled No. 24 Michigan (3-0) on Thursday night inside Purcell Pavilion, but the Wolverines pulled away in the fourth for the 76-66 victory.

The Fighting Irish did see the 2020-21 debuts of Sam Brunelle and Katlyn Gilbert, continuing to increase the depth of the squad.

“I thought we played an incredible Michigan team. I wasn’t surprised by the way that they fought,” said Notre Dame Coach Niele Ivey. “They were really physical, which was something we were preparing for. Unfortunately as far as the second half — we couldn’t get the stops that we needed to go out and run in transition. Wasn’t too happy with our effort defensively in the second half. I know we have a young team and several additions that haven’t practiced a lot. Hopefully, we can come back Sunday with a better defensive effort.”

Treys from Mabrey and Brunelle triggered an 8-2 start for Notre Dame. Gilbert also got in on the scoring action, as her third point of the period gave the Irish a 15-8 advantage. However, the Wolverines countered with a 7-0 run that extended into the start of the second quarter.

In the second, Notre Dame and Michigan traded shots as the lead changed eight times over the first three minutes. Next, the Irish offense was held scoreless for a four-minute stretch, as the Wolverines garnered a 33-25 advantage.

A Gilbert free throw, followed by a Walker three-pointer, reignited the Notre Dame offense to end the half. In fact, the Irish finished on a 9-3 scoring spree to trail just 36-34 at the midway point.

Michigan shot 14-of-30 for the half, while Notre Dame converted 14-of-34. Peoples and Mabrey led with eight and seven points, respectively.

Michigan started the third quarter with back-to-back 3-pointers, but Westbeld kept the Irish within striking distance with five straight points. Mabrey connected on a huge three at 6:40 to get within 45-44, as Michigan later maintained a small lead, 54-51, heading into the final period.

After a Peoples layup at 9:26, the Irish trailed just 56-55, but the Wolverines responded with a 7-0 run over the next two minutes, forcing a Notre Dame timeout.

The Irish continued to fight as Walker delivered from the free-throw line followed by a Brunelle three to cut it to 65-60. Yet Michigan stymied the momentum with another mini-run (8-1), pushing themselves on to the 76-66 victory.

Just like that, the Irish will close out the non-conference slate with IUPUI on Sunday, Dec., inside Purcell Pavilion. That contest will tip at 2 p.m. on ACCNX.