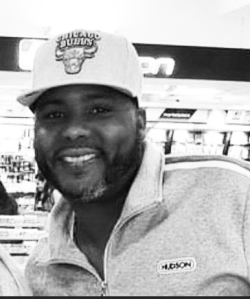 Terry spent most of his childhood in Chicago, the place he forever called home and in Vandalia where he stayed to pursue his football career. Football quickly became his heart and he dominated the football field early on in peewee sports up to high school in Niles.

Graduating high school, Terry received numerous full ride offers to play football, and he filtered through the offers and decided to attend Morris Brown of Atlanta. Unfortunately, the university lost its accreditation during his time there, and he decided to transfer to Olivet College, in Michigan. During his time in Olivet, he made lifelong friends and was quickly snapped into fatherhood during that time.

Terry was extremely ambitious, finding many ways to provide for his family, and he never left an opportunity on the table. In his unreleased auto biopic, he wrote: “You better do today, what you have planned for tomorrow!”

In 2008, he became the CEO of the million-dollar crude oil family trucking company, PCS. Being an entrepreneur allowed him to live and travel to several places but he always made sure he was close to family. He lived in North Dakota, where he started his business with his son and uncle. He soon moved and resided in Tennessee near his mother, aunt, daughter and brother for several years and recently relocated to Washington D.C. where his eldest daughter was attending college.

Terry was a man truly full of life. He often told many that he wasn’t living his best life; he was living his whole life. He had an aroma and smile that could light up an entire room, and he ensured he shared that aroma and those trademark dimples with anyone he came in contact with. He loved to travel, and you could often find him in a different state or country each week, although he was terrified of planes. He loved music and dancing; it wasn’t a party if Terry didn’t pull someone out on the dance floor to step. He loved to dress and smell good, and his outfit wasn’t complete without his hats and shades. He loved sports, always rooting on all of the Chicago and University of Michigan teams. Most of all, Terry loved to love. He was a loving father, brother, cousin, godson, godfather, uncle and friend to a countless number of people.

Terry was preceded in death by his mother, Ida Hickman; and father, Larry Hickman; along with a younger brother Derrick Hickman.

He inspired and empowered many during his walk of life, and although Terry has left us in his physical form, his spirit will forever remain with us. One of his favorite sayings was “Have a great day on purpose,” and his life will be celebrated by living that out … in that order!

Funeral Services will be at 3 p.m. on Friday, Dec. 4, 2020, at the Bogue Street Memorial Garden Cemetery in Vandalia. A time of visitation will be from noon until 2 p.m. also on Friday, at Brown Funeral Home, 521 E. Main St., Niles.

Because of the COVID-19 virus, the state of Michigan requires all in attendance to follow all guidelines including, social distancing, mandatory mask, and sanitizing. We appreciate your assistance in helping us to keep everyone healthy in attendance.

Arrangements have been entrusted with Brown Funeral Home. BrownFuneralHomeNiles.com.