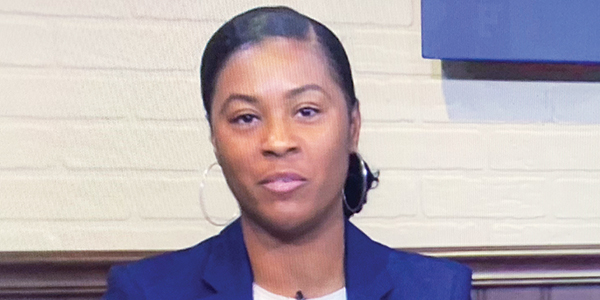 ATHENS, Ohio  — The No. 22 nationally-ranked Notre Dame women’s basketball squad erased a 14-point deficit in the third quarter at Ohio, but ultimately got edged out in the final seconds, dropping 86-85 to the Bobcats.

Dara Mabrey made the most of her Irish debut, tallying a career-high 34 points, with 15 coming in the third quarter alone.

Mabrey shot 11-of-19 overall and 7-of-14 from beyond-the-arc. Her seven made 3-pointers ties her sister Marina, Alicia Ratay and Sam Brunelle for the second-most in a single game. Sheila McMillen still holds the top mark with eight, set back against St. John’s on Feb. 28, 1998.

“Just happy we had a game,” said Notre Dame Coach Niele Ivey. “I thought Ohio did a great job with all the COVID protocols. Obviously, we came up short but a lot of positives. We faced a lot of adversity we weren’t expecting. We started off slow, but I was encouraged by our effort in the second half. Ohio’s two guards, (Cece) Hooks and (Erica) Johnson, played really well. Proud of this team and we’ll get ready for Miami Ohio on Sunday.”

Anaya Peoples played in her first game since her shoulder injury last January and recorded her fourth career double-double with 16 points and 11 boards. Peoples shot 6-of-12 from the floor. Destinee Walker also supplied 16 points, with a perfect 8-for-8 day from the free throw line.

Furthermore, Maddy Westbeld made her Irish debut, along with fellow freshmen Alasia Hayes and Alli Campbell. Westbeld, who started, reached double figures with 11 points on 4-of-7 shooting.

Notre Dame started 4-of-5 from the field and jumped out to a 17-12 lead, but Ohio rallied with an 11-0 run over the final 2:38 of the quarter to garner a 23-17 lead at the first break. Mabrey led the Irish effort with six points, followed by five from Westbeld.

Alli Campbell got the Irish on the board in the second, scoring her first career basket at the 8:09 mark, ending the Bobcat run. Mabrey was already in double figures at the 6:23 mark, before baskets from Peoples and Prohaska cut a 10-point deficit to four. Yet, Notre Dame was plagued by another offensive cold spell to end the quarter, allowing an Ohio 7-0 run to give the Bobcats a 41-30 lead.

Important to note, the Irish were without Westbeld for a majority of the half after early foul trouble. The freshman picked up her third foul at the 6:50 mark in the second quarter.

Facing a 14-point deficit at 7:22 in the third, the Irish rallied behind a hot-handed Dara Mabrey and Anaya Peoples. Mabrey went off with 15 points in the third, including three triples, while Peoples supplied 10 points. All-in-all, the Irish outscored Ohio 35-21 in the third period, which included both a 10-0 run and a later 8-0 run. Notre Dame shot 9-of-12 from the field.

Mabrey remained on fire to start the fourth, converting back-to-back treys to give the Irish a 71-65 lead. The game went back-and-forth in the final quarter, as Peoples, Campbell and Mabrey each provided huge baskets to keep the Irish out front.

However, Ohio’s Cece Hooks and Erica Johnson spurred the Bobcats to victory with 15 combined points in the fourth quarter. Hooks finished with 32 points while Johnson recorded 24 for the game.

DOWAGIAC — For the fifth consecutive year, the Dowagiac girls golf team has earned Division 3 Academic All-State from the... read more