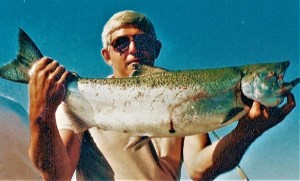 God reached down and invited Mike to fish in the big blue lake in the sky on Oct. 11, 2020.  Mike passed at home with family and friends at his side.

He was born on Aug. 13, 1947, to Nan and Don Yonker in Niles. He graduated from Niles High School in 1965. He obtained a bachelor of science in business from Indiana University in 1976. He worked at Tyler’s in payroll for most of his life until retirement. He served on the board of the Four Flags Area Credit Union for 42 years, 23 years as president.

Mike was kind, caring and generous his entire life, never asking others for help, but instead always being there for others when they needed help.  He always called to ask you “what’s going on” to see how you were doing.  It was never about him, but always about you! Mike is loved dearly by his friends, and as his good friend Dick Knauff said, “He was the kind of friend you thanked God for.”

He was an avid hunter and fisherman. He enjoyed spending time with his family at special hunting spots, at state land, the farm or anywhere he could enjoy the outside. Nothing made Mike happier than fishing on his boat, or any boat, and having fish frys! A passionate and out-standing fisherman, he knew all the details of the lakes and rivers, and was always willing to share with anyone where and how to catch fish like he did.

Mike always had an amazing garden every year. He loved music, especially the oldies! He also loved his Z28 and GTO. He was a devoted member of the Howard Township Conservation Club and the NRA.

A heartfelt thank you to everyone that helped Mike, especially Kay Miller, her son, Allen and his wife, Lisa for dedicating timeless hours to being there for Mike!  Preceding him in death were his father, Don Yonker, and his brother, Don Yonker Jr.

We will miss Mike’s huge heart and kind soul every day but hope that when he fishes with his father and brother, Bing, in that big blue lake, he doesn’t show them up too much!

A celebration of Mike’s life will be planned in the future!  Donations can be made to Mike’s favorite place Judicial Watch, Inc. ATTN: Director of Development 425 Third St., SW, Suite 800 Washington, D.C. 20024, or Paws of Hope Animal Rescue P.O Box 13, Stevensville, MI 49127. (Not all organizations will give the family notification of donations so we can acknowledge your kindness.  If you prefer, make donations to Judicial Watch or Paws of Hope & mail to Ash-ley Yonker, 1109 Manor St., Kalamazoo, Mi 49006).