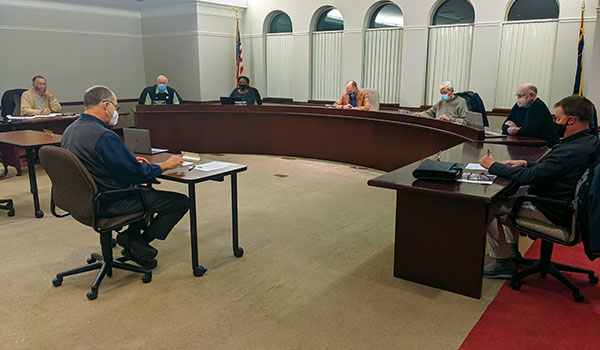 DOWAGIAC — The city of Dowagiac has provided citizens with easy access to their utility payments — and it is hearing a positive response.

City manager Kevin Anderson relayed to the city council during its meeting Monday the positive response he has received regarding the drive-up utilities portal, also known as “the Tube,” installed behind city hall.

“With the department of health’s orders, we’ve got the lobby area closed down,” Anderson said. “But what has been an incredibly helpful thing is to have that tube out there. People have come to the door, and we’ve been able to direct them to the Tube, and we can handle business and be able to have that face-to-face contact with people. I think it’s really allowed us to still give the same effective counter service to the customers. We’re getting some really good feedback from folks right now when it’s started becoming pretty heavily used over the last four or five days as people become more aware.”

Anderson said that a canopy to protect the portal from the elements will be purchased and installed soon.

“One of the problems we have is that these canopies are designed with big, bold, flashing colors,” he said. “They just don’t fit well with what we have back there. We have some picked out with more subtle designs. Unlike McDonald’s or something that wants high visibility that screams advertising, we want something that blends more with the architecture downtown.”

In addition to the portal at city hall, a payment kiosk for utility payments is in the process of being established inside the Dowagiac Family Fare at 56151 M-51 S. The kiosk would allow citizens more access to city services outside of the traditional 8:30 a.m. to 5 p.m. Monday to Friday schedule. Locating a kiosk at Family Fare would make the kiosk available 18 hours a day, seven days a week, Anderson said.

In other news, the council also passed a resolution to direct Anderson to prepare the appropriate notices necessary for the council to formally consider a public hearing regarding a portion of the right of way of Paris Avenue be vacated.

According to a memo to the council from Anderson, the owner of the former McKinley School approached the city requesting that a portion of the right of way of Paris Avenue be vacated. Paris Avenue divides the former school building and the adjacent playground and vacant land. The property has never served as a road, and the neighborhood should not be adversely impacted by the requested right of way abandonment, according to the memo.

“What we’re proposing is to abandon that area that only impacts one property owner,” Anderson said. “We’ll need to issue a public hearing notice and notify people within 300 feet of it.”

While the city does not have any utilities in that area, the council is considering having an easement on the property just in case it is needed.

Lastly, the council approved a resolution that establishes consultants of record for the U.S. Department of Agriculture Sewer Improvement Loan and authorizes the city manager to execute and administer agreements with them for said project.

In September, the council approved resolutions authorizing $5 million and $5.17 million in loans from the USDA for sanitary sewer improvements. The two loans will cover manhole improvements, sewer line improvements and significant improvements at the wastewater treatment plant.

The loans will be for 40 years at an interest rate of 2.5 percent, according to Anderson. Design work has already begun, and construction is expected to begin during the summer of 2021 and continue for approximately 18 months.

DOWAGIAC — The slots will go on at Four Winds Casino in Dowagiac. The casino franchise, with locations in New... read more