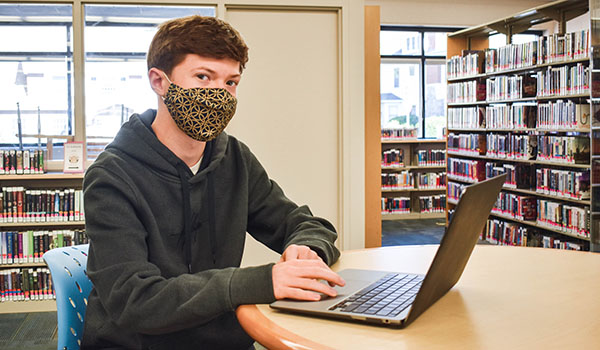 Vikings Stuart Lundberg, his brother Sawyer Lundberg, Sydney Skarbek and Maggie Chisonga all set off to take on the task of investing $1 million beginning Sept. 28 for seven weeks, competing with 43 other teams from around the state. The teams were competing for one of the top three spots with Michigan Tech University’s Husky Investment Tournament.

At stake in the tournament was a cash prize of $1,000 for the top team. The $1 million to invest was simulated and tracked by the MTU’s tournament team and the students.

Each week of the competition, MTU released educational videos and slideshows to the students to give them a deeper understanding of how stock markets and investing work.

One school ended up taking the top three positions — Houghton High School, out of Houghton, Michigan. The Niles High School team were in the top three spots during the competition for a week or so, and finished in 14th place.

Stuart Lundberg wished he could have seen the investments the Houghton High School team were strategizing, so he could make changes in the future.

“We definitely learned a lot,” Lundberg said. “It was fun to teach [the team] what I know about stocks and investing, because that helps me.”

Lundberg began making his own investments earlier this year, after reading and becoming fascinated with how the stock market worked.

“We were in, maybe the fifth week, and [our team] was number one or two for a good four days. That was before the election, and it was because we invested in marijuana companies,” Lundberg said.

The legalization of marijuana was on the ballots in four states across the U.S., and Lundberg and his team took note of the interest in investing in the companies.

“The media predicted [marijuana measures] would win, so the stocks were a safer bet,” Lundberg said.

The teammates met remotely over the seven weeks to watch the videos being sent to them from MTU, and to discuss what they were each seeing in the day’s market performance. Lundberg said learning from each other’s interpretation and information was important.

“I definitely now watch a few more media outlets that I didn’t really know about before,” Lundberg said. “There’s also a lot of social influencers online that invest.”

“It makes investing more fun on the newer platforms,” he said.

“It was a lot more money than I was familiar with investing, because it was a million dollars, but it was a really cool learning opportunity to invest into a simulated market with my team,” he said.

Lundberg said there will be another investment competition in the spring.

“We will, hopefully, do that with less major news events,” Lundberg said. “Hopefully we can do better. But there were a lot of learning opportunities.”

NILES — Niles Community Schools Superintendent Dan Applegate feels more ready for this round of remote learning than he did... read more